Introduction: In biopsy naïve patients with suspected prostate cancer (PCa) the indication to perform multiparametric magnetic resonance imaging (mp-MRI) guided target biopsy (TB) associated to or in place of standard biopsy (SB) is still discussed. The aim of this RCT was to evaluate the detection rate (DR) of overall PCa and clinically significant PCa (csPCa) in patients with positive mpMRI who were randomized to undergo TB (Group A) vs TB + SB (Group B)

Methods: After the approval of the local Ethics Committee, we enrolled patients from 04/2019 to 10/2021 at our Center. The inclusions criteria were: age < 75; no previous prostate biopsy; PSA < 15 ng/ml and positive (Pirads > 3) mp-MRI. The randomized allocation of the patients was defined with a specific query on www.randomization.com. All the TB were performed with the BioJet fusion system (D&K Technologies, Barum, Germany), either by a transrectal or transperineal approach. 4 or 6 cores were taken in case of lesions <8 or >8 mm respectively. In accordance with the protocol by Rodriguez-Covarrubias et al., transrectal SB was performed obtaining 12 cores via a transrectal approach. csPCa was defined as ISUP > 2 for TB and the updated Epstein criteria for SB. Non parametric test were used to compare the two groups; all the analysis were performed with SAS® Statistic Software for Windows

Results: 201 and 190 patients were enrolled in Group A and B respectively. The patients’ demographics were comparable in both arms. Overall PCa DR was 64,67% and 71.05% in Group A and B (p=0.17), whilst csPCa DR was 60,69% and 63,15% (p=0.61). Focusing on Group B, PCa and csPCa were found at SB alone in 11.05% and 7.89% of cases, respectively; a csPCa was found contralateral to the index lesion in 2.63% of the cases. Upgrading from a not csPCa to a csPCa with SB was registered in 4,21% of the cases. No significant differences in terms of periprocedural complications were recorded between the two groups. See Table 1

Conclusions: In biopsy-naive patients with suspected PCa and positive mpMRI, the addition of SB to TB did not significantly increase the DR of PCa or csPCa, even if a non-negligible rate of csPCa were diagnosed by SB alone. 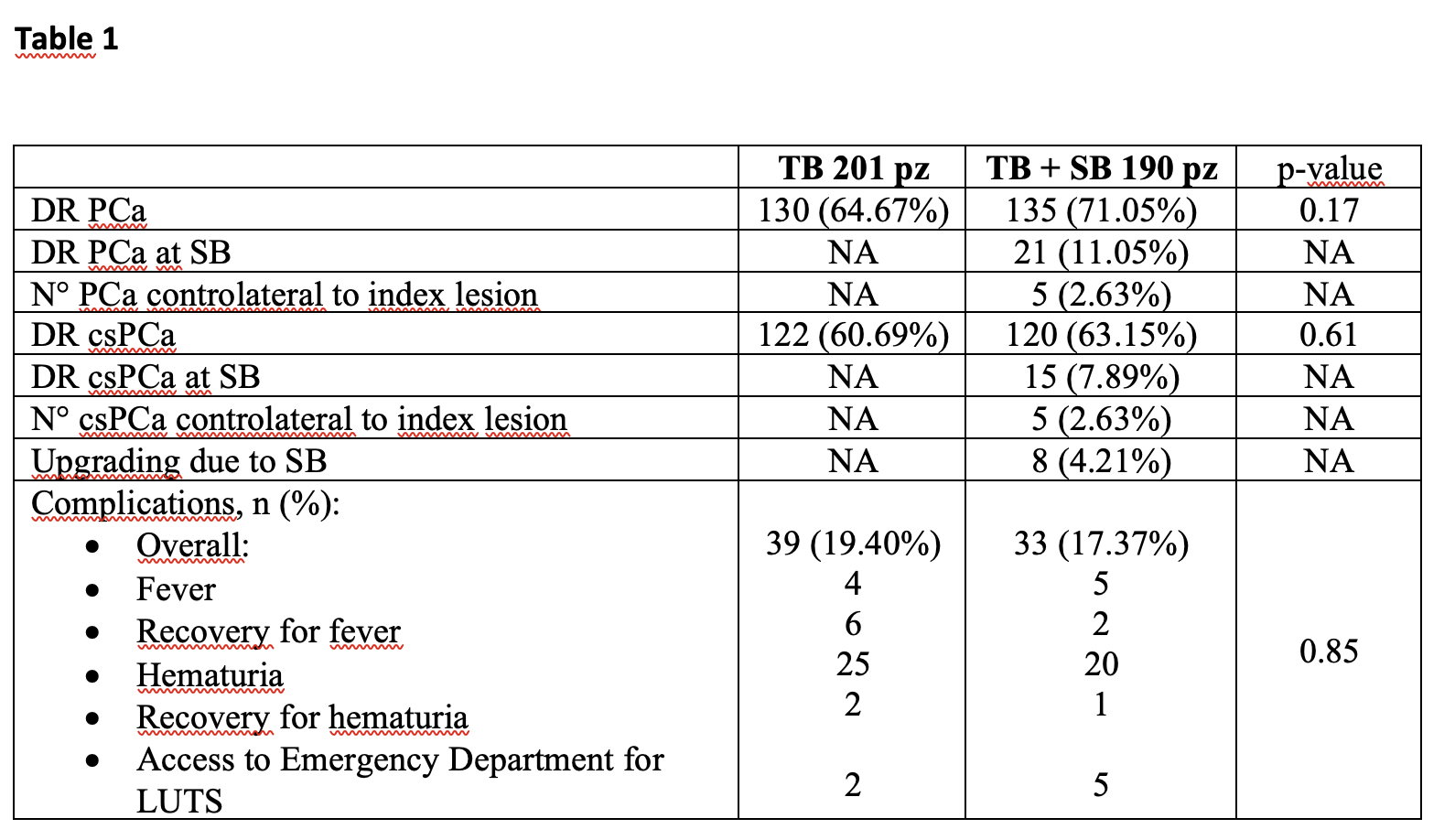