Introduction: Investigating the racial underpinnings of disease is challenging due to several confounding factors, most notably socioeconomics. We investigate the effect of race, comparing blacks versus whites, on overall survival (OS) in patients with renal cell carcinoma (RCC) using a national registry, with attention to baseline socioeconomic differences.

Methods: We queried the National Cancer Database (NCDB) for patients diagnosed with RCC between 2004 and 2017 with complete baseline demographic data available. Comparative statistics were used for baseline comparisons. Multivariable Cox proportional hazards regression with adjustment for socioeconomic and disease factors was performed for OS.

Results: A total of 471,833 patients with RCC were included, of whom 57,919 (12.4%) were black. Compared to whites, black patients were younger (61 years vs. 64 years, P<0.001), more comorbid (P <0.001), less likely to have private insurance (36.7% vs. 44.5%, P<0.001), more likely to be in a lower income bracket (P <0.001), more likely to be diagnosed with non-clear cell RCC (54.0% vs. 24.8%, P<0.001), and more likely to present at a lower cancer stage (P <0.001). The proportion of blacks diagnosed with RCC has increased over time (P <0.001). On multivariable Cox regression, black race was associated with worse OS. This remained true for subanalyses in patients with clear cell RCC only and in those with small renal masses (cT1aN0M0) only. Other significant predictors of worse OS included lack of insurance, lower income, and non-clear cell histology [Table]. Among patients with metastatic disease at diagnosis, in which mortality is more likely to be cancer-specific, race and insurance status were no longer significant predictors of OS. Instead, the receipt of systemic therapy, which was higher in whites (64.3% vs. 59.4%, P<0.001), and RCC histology were among the strongest predictors of OS. 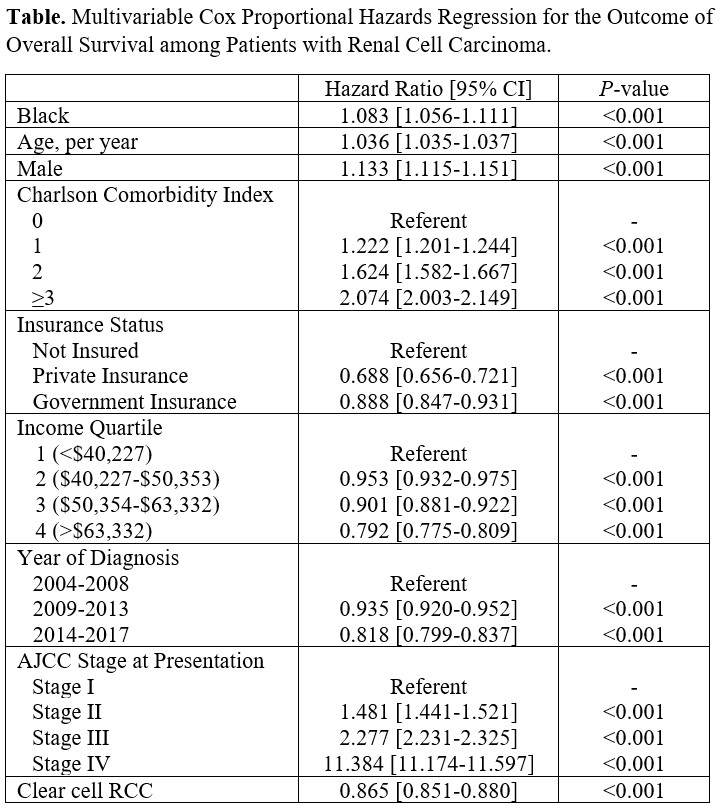