PD19-02: Comparison of Superpulse Thulium Fiber Laser vs. Holmium Laser for Ablation of Renal Calculi in an In Vivo Porcine Model

Introduction: The ability of laser lithotripsy to render renal calculi into passable “dust” is essential to the success of ureteroscopic stone therapy. Herein we evaluated the fragment size produced by a superpulse thulium fiber laser (sTFL) and a holmium laser (Ho:YAG) in an in-vivo porcine urolithiasis model.

Methods: Twenty-four kidneys from 12 juvenile female Yorkshire pigs were randomized to receive either Ho:YAG or sTFL treatment. Pre-weighed and pre-measured canine calcium oxalate stones were placed into each renal pelvis by a pyelotomy.  A 14 French, 35 cm  ureteral access sheath was placed. Using a dual lumen flexible ureteroscope (Richard Wolf Inc.), kidneys were randomized to lithotripsy with either a Ho:YAG 272µm laser fiber at 16W (0.4J, 40Hz) or sTFL 200µm laser fiber at 16W (0.2J, 80 Hz). Lithotripsy was continued until no fragments over 1mm were observed by the surgeons (ZO, PJ). Temperature was measured with two K-type thermocouples positioned percutaneously:  one within the upper pole calyx and the other within the renal pelvis. No stone basketing was performed. Kidneys were bivalved and residual fragments were dried, weighed, and sieved. 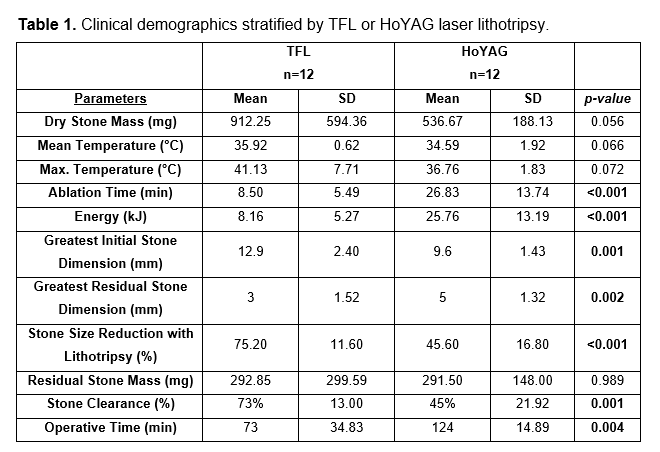