Introduction: While prostate specific antigen (PSA) bounce following radiation therapy for prostate cancer (PCa) treatment is well established, the parameters to predict this occurrence and differentiate it from biochemical recurrence (BCR) following stereotactic body radiotherapy (SBRT) are unknown. The purpose of this study is to investigate associations between pre-treatment and post-treatment variables among patients experiencing PSA bounce, BCR, or neither following SBRT.

Methods: An IRB-approved PCa database was reviewed for patients who underwent primary SBRT.  Patients with less than 18 months of follow-up or were missing > 3 PSA measurements following SBRT were excluded.  Patients were divided into outcome groups experiencing PSA bounce, BCR, or neither.  PSA bounce was defined as a rise of >0.2 ng/mL over the pre-rise nadir followed by a decline without intervention.  BCR was defined by Phoenix criteria.  Pre-treatment and post-treatment characteristics were analyzed between groups.  Results that were significant when comparing PSA bounce to BCR were then analyzed in a multivariate logistic regression model to determine predictors for PSA bounce.

Conclusions: While there is overlap among patients who experience PSA bounce or BCR following SBRT, the timing of which the PSA rise occurs, the PSA nadir value, and the time to PSA nadir are useful variables in the management of a rising PSA in patients following SBRT. 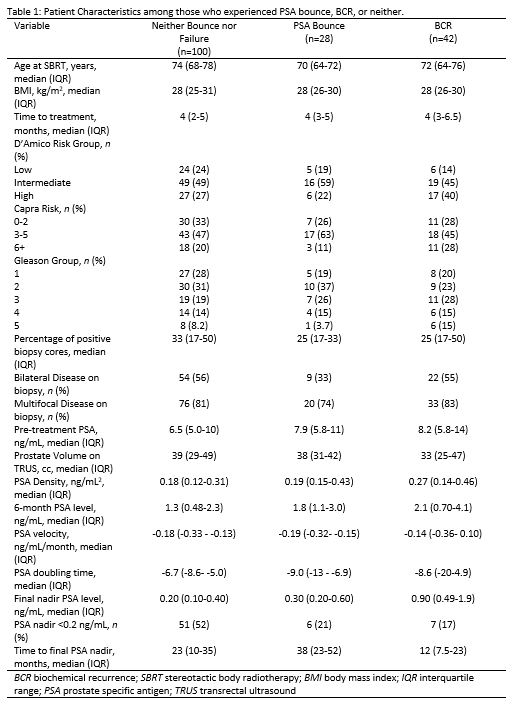