Introduction: Efficacy/safety of collagenase clostridium histolyticum (CCH) for Peyronie’s disease (PD) were shown in two phase 3, randomized, double-blind, placebo (PBO)-controlled trials. CCH was administered in up to 4 treatment cycles at 6-week intervals; each cycle included two injections 1 to 3 days apart and treatment included penile plaque modeling. This analysis evaluated cumulative and incremental response by treatment cycle in men with PD to assess the clinical benefit of a full series of CCH injections.

Methods: In this post hoc analysis, data were pooled from the 2 trials and treatment response was defined as =20% reduction from baseline in penile curvature. The number of nonresponders ( <20% curvature reduction from baseline) was determined after each of 4 treatment cycles (Weeks 6, 12, 18, and 24), and patients who met the response criterion after the next treatment cycle (eg, nonresponders after 1 cycle who were responders after 2 cycles) were identified. A subgroup analysis assessed treatment response by baseline penile plaque calcification (yes/no) and curvature direction (dorsal/lateral). CCH versus PBO response rates were compared using Fisher’s exact test.

Results: Analysis included 832 adult men: (CCH [n=551]; PBO [n=281]) who received =1 injection of CCH or PBO. Baseline mean ± standard deviation (SD) penile curvature was 50.6 ± 14.7 degrees in the CCH group and 50.4 ± 14.1 degrees in the PBO group. After the first treatment cycle, 379 men in the CCH group (68.8%) and 227 in the PBO group (80.8%) were treatment nonresponders. The percentage of nonresponders who were classified as responders after the next treatment cycle was significantly greater for CCH versus PBO after the second, third, and fourth treatment cycles, as well as the Week 42 follow-up visit (Figure 1). Percentages of responders increased after each of the 4 CCH treatment cycles and was significantly greater versus PBO in men subgrouped by plaque calcification or curvature direction.

Conclusions: These data indicate that incremental benefits were obtained from each of the 4 CCH treatment cycles for PD. Results support clinical benefits with performing a full series of 4 CCH injections, including among nonresponders after initial cycles. 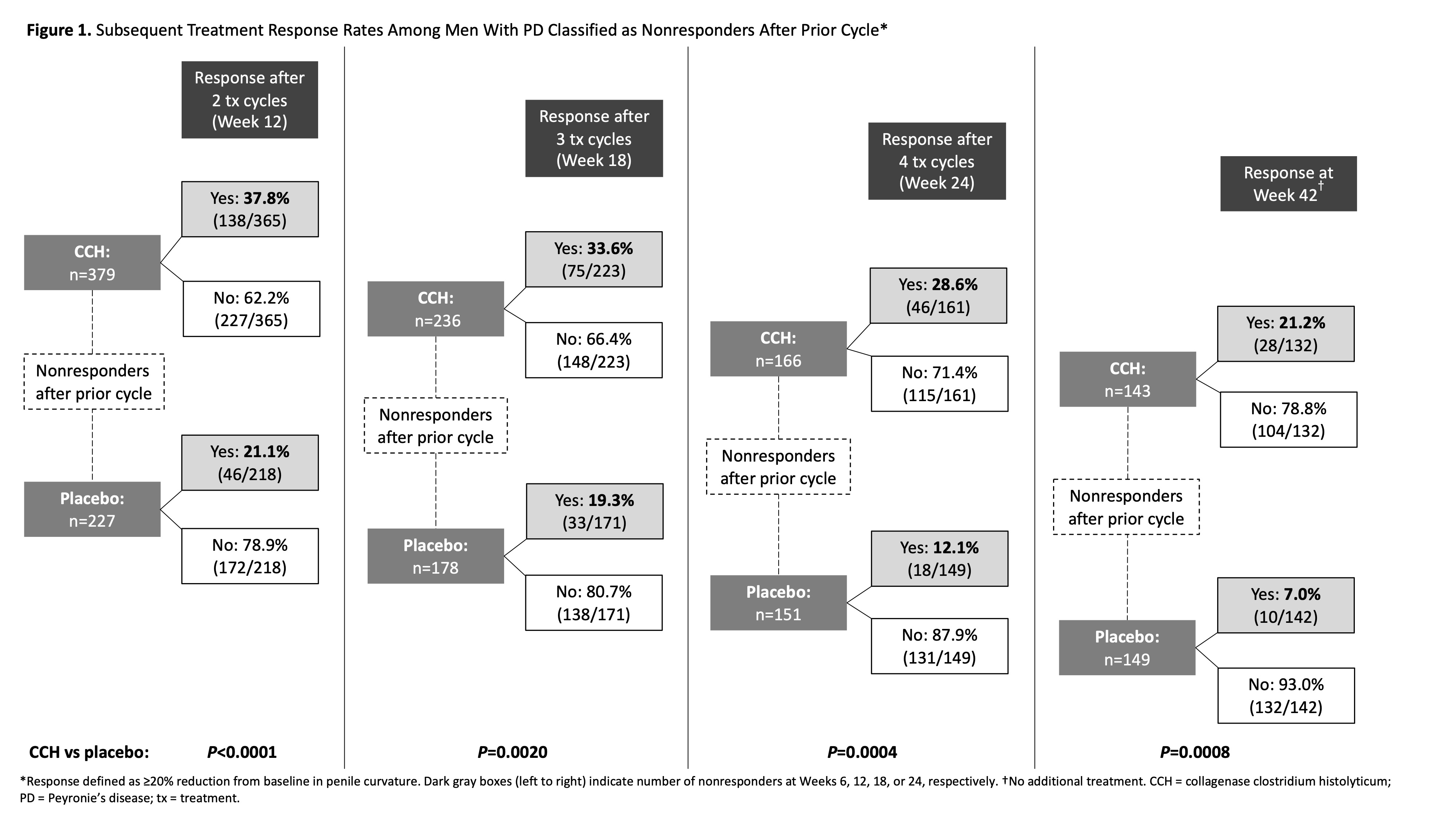