Introduction: Alzheimer’s disease (AD) is the most prevalent type of dementia. Pathological changes in the AD brain include Amyloid ß-protein (Aß) plaques. In addition to cognitive decline in AD patients, urinary incontinence (UI) is more prevalent in AD patients than in the general geriatric population, for which there is no biological explanation. Hepatocyte Growth Factor (HGF) is present in Aß plaques and is modulated by synaptic activity in hippocampal neurons. In addition, HGF phosphorylates the NMDA receptor, which regulates urinary bladder activity. HGF levels have been found to be increased in cerebrospinal fluid and serum of AD patients but urinary levels have yet to be assessed. We hereby hypothesize the potential of increased HGF detection in urine for assessment of AD with UI at a single AD Center of Excellence.

Source of Funding: Support from the Aikens Research Center at Beaumont Research Institute. 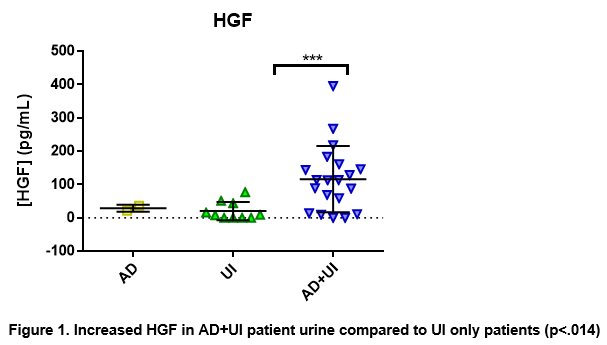