PD33-12: Pre-operative risk calculator of the probability of completing nephron-sparing surgery for kidney cancer based on tumour complexity and surgical approach

Methods: 675 patients diagnosed with a cT1-2 renal mass treated with RN or PN by 7 individual surgeons who performed overall more than 50 cases each at a single high-volume Institution were assessed in a prospective database. SPARE nephrometry score was used to evaluate tumour complexity. Multivariable logistic regression models were used to estimate the probability of completing PN. Predictors consisted of age, eGFR, clinical tumour size, SE, APP, SPARE, and ECOG PS. Since a non-linear relationship may exist between continuous variables and the outcome, restricted cubic splines were used. Finally, for clinical purposes, we built a risk calculator based on the regression coefficients.

Conclusions: For the first time, in patients diagnosed with a cT1-2 renal mass and elected for surgical treatment, it is possible to estimate the probability of PN completion with optimal predictive accuracy using the proposed risk calculator. This key estimation can be very useful for urologists to plan the best treatment strategy (open vs. laparoscopic vs. robotic) and for patients to be properly informed about their treatment plan.

Source of Funding: no 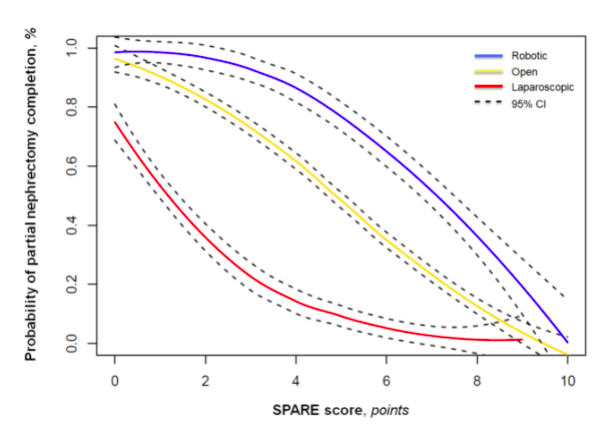