Introduction: Cyclin-dependent kinase 12 (CDK12) belongs to the cyclin-dependent kinase (CDK) family of serine/threonine protein kinases. In contrast to CDKs which promote cell cycle progression, CDK12 is a transcriptional regulator of various cellular functions, most importantly cellular response to DNA damage and stress. Genomic alterations in CDK12 have been detected in up to 7% of patients with metastatic castration-resistant prostate cancer (CRPC). Phosphoproteomic studies have revealed that Protein Kinase D1 (PrKD1), another member of the serine/threonine kinase family, is the only kinase known to phosphorylate CDK12 at serine 681 (s681) and serine 685 (s685). While there is an increasing body of literature on CDK12 downstream signaling, there is almost no published data on upstream effectors or regulation of CDK12.

Methods: Using site-directed mutagenesis, we generated CDK12 s681a and s681a+s685 mutants and transfected them into stable C4-2 and C4-2-PrKD1 cell lines to evaluate the interaction between CDK12 and PrKD1.

Results: Immunoprecipitation and immunoblotting revealed that endogenous CDK12 is stable in C4-2 cells with known levels of PrKD1 expression. However, stable transfection of C4-2-PrKD1 cells with wild-type CDK12 resulted in the degradation of nascent CDK12, whereas the non-phosphorylated mutants (s681 and s681+s685) remained stable.  Our results suggest that PrKD1-mediated phosphorylation of s681and/or s685 residues affect CDK12 stability in C4-2-PrKD1 cells. We confirmed this finding by treating C4-2-PrKD1 cells with MG-132, a 26 S proteasome inhibitor, and repeating the experiment. Proteasomal inhibition rescued nascent transfected CDK12 levels even after PrKD1 phosphorylation.

Conclusions: Our study demonstrates that CDK12 degradation might be mediated by PrKD1 phosphorylation at s681 and/or s685. Because PrKD1 and CKD12 are dysregulated across cancers, the results herein presented have potential implications for the treatment of not only prostate cancer but also other human malignancies. 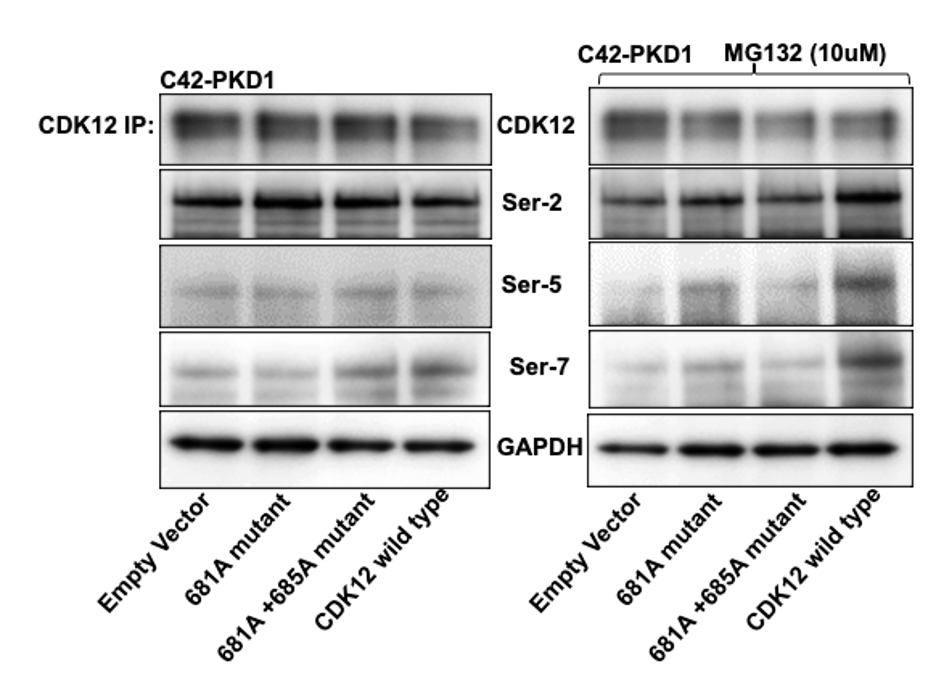