Introduction: The association between benign prostatic hyperplasia (BPH) and prostate cancer (PCa) has not been confirmed. However, these two entities share multiple risk factors like chronic inflammation, metabolic disorders, and androgen-dependent growth. Therefore, an association at a molecular level is at least possible, if not likely. We sought to identify variations in gene expression that could help elucidate some of the pathways for development of PCa in patients with BPH.

Methods: We included 98 men with BPH, positive prostate MRI (PIRADS =4), and subsequent negative targeted biopsy from 11/2014 – 01/2018. RNA sequencing was performed on tissue cores from the MRI lesion, as well as cores from a distant region (n=2 biopsy regions per patient). All patients were followed for at least 3 years to identify those who went on to develop PCa.  We compared the genetic profiles of those who did not develop PCa (“BPH-only”) vs. those who did (“BPH/PCa”). Then, we identified the subset of men with BPH who had the highest AUA symptom scores (AUAss) and compared their gene expression to the group with PCa.

Results: At a median follow up of 47.5 months, 83 men had no evidence of cancer and 15 had BPH/PCa. We compared gene expressions of 14 men with symptomatic BPH (AUAss =18) vs. 15 with BPH/PCa. There were two clusters of genes, suggesting the two groups had distinctive molecular features. Differential analysis revealed genes that were upregulated in BPH-only and downregulated in BPH/PCa, and vice versa (Figure 1). Symptomatic BPH men had upregulation of T-cell activation markers (TCR-CD3, PKC theta, ZAP70, LCK) and chemokine receptor expression. In contrast, men with BPH/PCa had upregulation of NKX3-1 and HOXB13 transcription factors associated with luminal epithelial progenitors, but depleted of immune cells, suggesting a cell-autonomous role in immune evasion.

Conclusions: Symptomatic BPH with immune-enriched landscapes may support anti-tumor immunity. Furthermore, RNA sequencing of benign biopsy tissue showing upregulation of NKX3-1 and HOXB13 with absence of T-cells, might help identifying men who are at higher risk of developing PCa, which could help tailoring their treatment and potentially prevent the development of PCa. 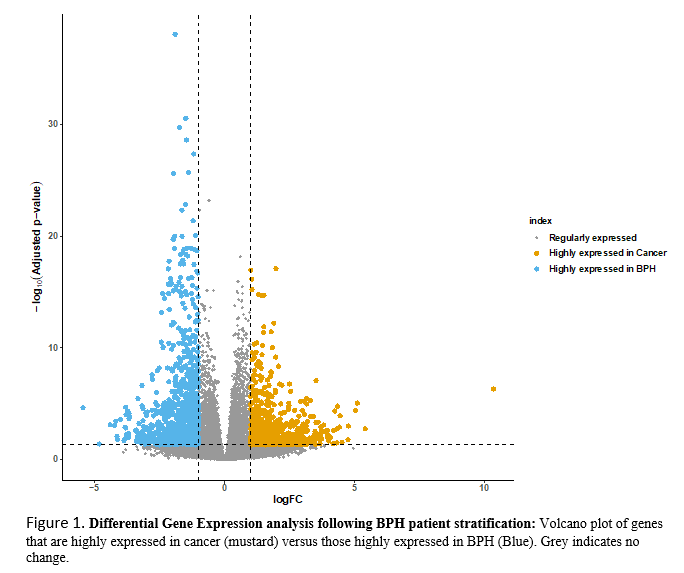