Introduction: In a previous 2-centre study (Eur Urol 2010), we demonstrated that grade 3 disease (G3) and lympho-vascular invasion (LVI) were independent risk factors for early metastatic SCC in penile cancer (SCCp).  However, the role of perineural invasion (PNI) was not formally investigated. Our objective was to re-assess previously analysed variables using an updated data set and to determine whether PNI may additionally have a role in the prediction of occult lymph node metastases in SCCp.

Conclusions: PNI is an independent predictor of occult metastatic spread in penile carcinoma. Until now, the role of PNI as a prognostic indicator has not been as extensively examined when compared with tumour grade, stage, and presence of LVI. Its significance is not reflected in current guidelines on disease staging and management and this should be reconsidered. 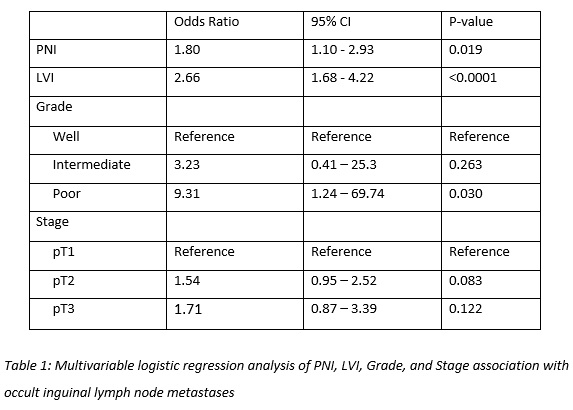