Introduction: Penile Prothesis (PP) implantation in transgender (TG) men has only been described in small case series, which have demonstrated high complication and explantation rates. Herein we described our institution’s post-neophallus PP experience to date.

Methods: We performed a retrospective review of all transmen who had undergone PP implantation at our institution from January 2015 through October 2021, yielding a cohort of 44 men. Men who underwent phalloplasty for another reason (trauma, infection, priapism) were excluded from this cohort. Both malleable (MPP) and inflatable (IPP) prostheses were included in the cohort. One stage PP implantation was done in all cases. The surgical team consists of a plastic surgeon and a reconstructive urologist who specialize in gender affirming surgery. All men received pre-operative antibiotics with vancomycin or cefazolin and gentamycin.  For this analysis, we considered only the initial implant done at our institution. We analyzed preoperative, operative, and post-operative characteristics, as well as predictors of explant in the 15 men who were explanted using logistic regression.

Results: Cohort characteristics and outcomes are represented in Table 1. 44 PPs were implanted. The mean follow-up (either to explant or to most recent clinic visit) was 16 months (95% CI: 11 – 21). The men in the cohort were young, more commonly underwent radial forearm free flap (RFFF) phalloplasty than anterior lateral thigh (ALT) phalloplasty, and a majority of the phalloplasties were completed at our institution. More than two thirds of the implants were IPPs, and the median operative time was less than two hours. Blood loss was minimal in all cases, and most men underwent concomitant prosthetic testicle placement. 15 men total required explant, 3 for infection and 12 for device malposition, discomfort, or impending erosion. Mean implant survival was 25.5 months (95%CI 17.8-33.2). Predictors of explanation were age (OR 1.23, p 0.037), smoking (OR 96.44, p 0.024) and operative time (OR 1.04, p 0.037)

Conclusions: We present one of the largest cohorts to date of PP implantation in TG patients, demonstrating success after both RFFF/ALT phalloplasty. In addition, we demonstrate low rates of infection and subsequent explant. Age, smoking history, and operative time predicted explantation. 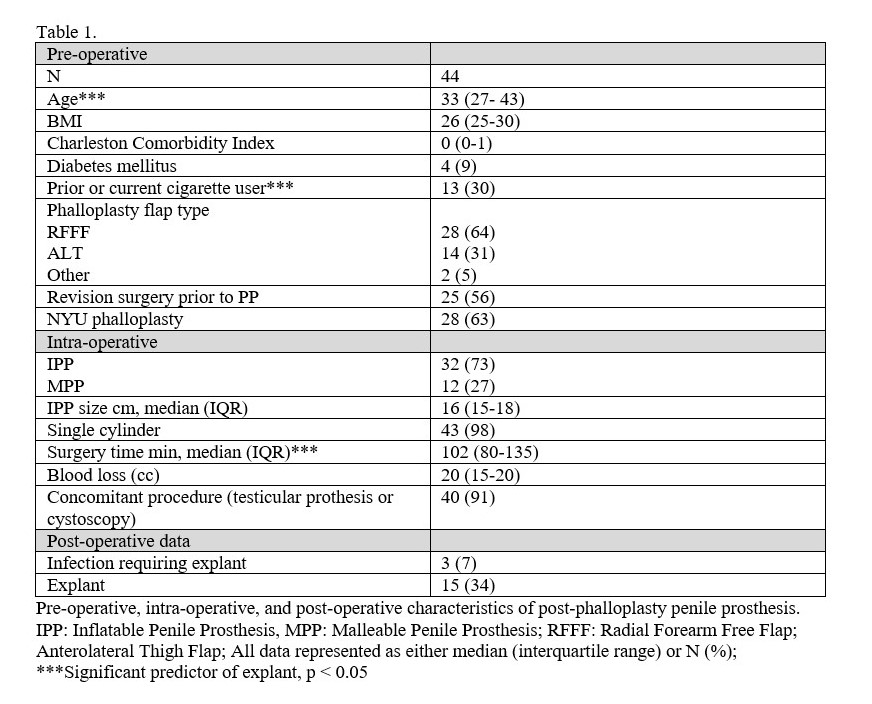