Introduction: The advantages of robotic assisted over laparoscopic radical prostatectomy radical prostatectomy (RARP over LRP) have rarely been investigated in a randomised controlled trial. We have previously reported the perioperative and 1 and 5 ys-results of a prospective randomized trial comparing RARP and LRP. The aim of this study was to evaluate 10-yr results from that trial.

Methods: From January 2010 to January 2011, 120 patients (40-75 yrs.) with organ-confined prostate cancer (T1-2-N0 M0 clinically staged according to TNM 2009) and to whom radical prostatectomy was proposed were enrolled and randomly assigned (using a randomization plan) to one of two groups based on surgical approach: the RARP group and the LRP group. All interventions were performed with transperitoneal anterograde technique by the same surgeon.

Continence and potency were evaluated after during 10 yrs of follow-up. Patients were defined as continent if they did not use any pads or used one safety pad per day, potent with an IIEF-5 score >17.

Results: The two groups (RARP n= 60, LRP n=60) were comparable in terms of demographic data; no differences in terms of pathological results were found. PLS-DA modeling allowed discriminating RARP over LRP individuals, as reported in the following figure. RARP subjects showed significantly higher continence rates compared to those of LRP individuals. Moreover, PLS-DA models remarked the erection rates and the potency rates (after 5-10 years) as significant for the RARP population. The satisfaction rate after 5 and 10 years turned to be higher in the RARP cohort, too.

Conclusions: This 10 yrs long terms findings confirmed our previously published results at 1 and 5 yrs after the intervention. RARP provided better functional results in terms of the recovery of continence and potency; with higher patient’s satisfaction. 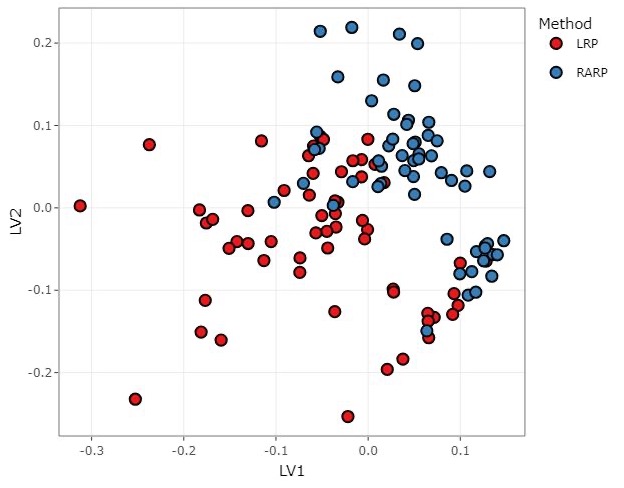