V08-09: Series of missed fibroepithelial polyps in the pediatric population

Introduction: Fibroepithelial polyps in the urinary tract are a rare cause of obstructive uropathy. We hypothesized that the presence of polyps should be considered as a potential cause of ureteral obstruction during ureteral spatulation at the time of reconstruction in older children.

Methods: We queried our institution’s prospectively managed pyeloplasty and ureteroureterostomy databases to identify patients with findings of fibroepithelial polyps between 2008-2021. Baseline demographics, clinical presentation, imaging details, and post-operative details including resolution of symptoms/hydronephrosis or need for further intervention were aggregated.

Results: We identified 7 patients (all male) with fibroepithelial polyps who presented at a median age of 10.4 years (IQR: 9.1, 12.9) [Table 1]. All patients underwent cross-sectional imaging with no polyps visualized. There was a possible crossing vessel visualized in 2 patients who underwent magnetic resonance urography (MRU). 6/7 patients underwent pyeloplasty for presumptive ureteropelvic junction obstruction (UPJO), while one patient underwent an upper to lower pole ureteroureterostomy (UU) following a ureteroscopy that revealed polyps in the distal upper pole ureter of a duplicated system. The median age at surgery was 10.5 years (IQR: 9.5, 13.1). During surgery, retrograde pyelogram (RPG) was performed in 3/7 patients and polyps were visualized in 2 cases. During the median follow-up duration of 27.4 months (IQR: 6.3, 43.6), 2 patients required further intervention: 1 patient required 2 endoscopic interventions for persistent polyps, and 1 patient required 6 endoscopic interventions for persistent polyps/recurrent stones, ultimately requiring a redo pyeloplasty 5.9 years after the index procedure.

Conclusions: In our series, polyps were missed on preoperative imaging (including cross-sectional imaging) in all cases. It is critical for urologists to be aware of polyps as a potential source of obstruction as they can increase the complexity of a reconstruction and, if missed, may result in a failed repair. Performing a RPG prior to upper tract reconstruction can potentially reveal the diagnosis and more clearly delineate the extent of the polyps. Failure to adequately spatulate the ureter and remove all the polyps can result in recurrence which is why we advocate for longer post-operative follow up in these patients. 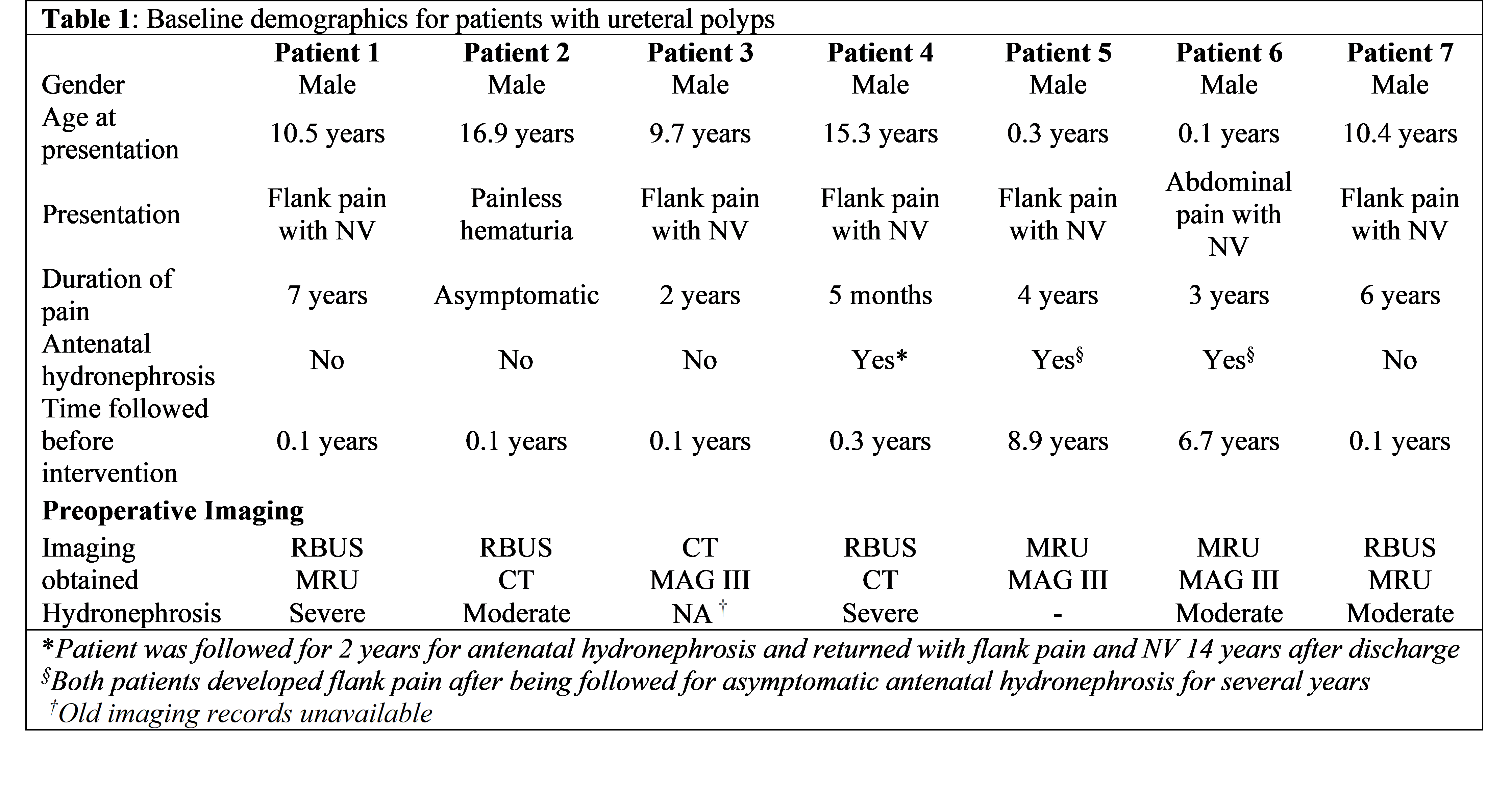