Introduction: Despite ample evidence of safety and superiority, transurethral enucleation procedures, most commonly with the holmium laser (HOLEP), have not been widely adopted ( <5% in US), likely due to a combination of a steep learning curve and technological barriers. Herein we present our experience with transurethral enucleation using the Olympus® bipolar electrode, a technology with wide availability, use, and surgeon familiarity.

Methods: We reviewed consecutive transurethral outlet procedures using bipolar energy for benign prostatic hyperplasia (BPH) from a single institution from 2010-20 and divided them into two cohorts: standard transurethral resection in saline (TURis; n = 383) and transurethral bipolar enucleation (TUBE; n = 208). All TUBE procedures were performed by a single surgeon. Perioperative characteristics between the two cohorts were compared with unpaired two-tailed t-tests and Chi-squared tests. A separate learning curve analysis was performed for the TUBE procedures that determined the impact that case number had on operative time and tissue resection.

Results: Comparisons are shown in the Table. The TUBE cohort was more likely to be catheter dependent pre-operatively and have a higher pre-op PSA. TURis operative time was 10 minutes less on average, but TUBE tissue resection weights were significantly greater. Hospital and catheter times were statistically similar. Post-operatively, TUBE led to a greater reduction in PSA, catheter dependence and BPH medication use. De novo incontinence and need for secondary outlet procedures were higher in TURis. De novo PDE-5 use was greater in TUBE. Cancer detection was greater after TURis. The variability in TUBE operative time (r2 = 0.0024) and resection weight (r2 = 0.007) was not related to surgery number/surgeon experience.

Conclusions: Utilizing the same instrumentation and electrodes, the TUBE technique offers significant advantages to a standard TURis loop resection without an appreciable learning curve. Widespread instrument familiarity, as well as the ability to perform both resection and enucleation maneuvers in the same case, may increase the likelihood of adoption into clinical practice for those hesitant to learn HOLEP. 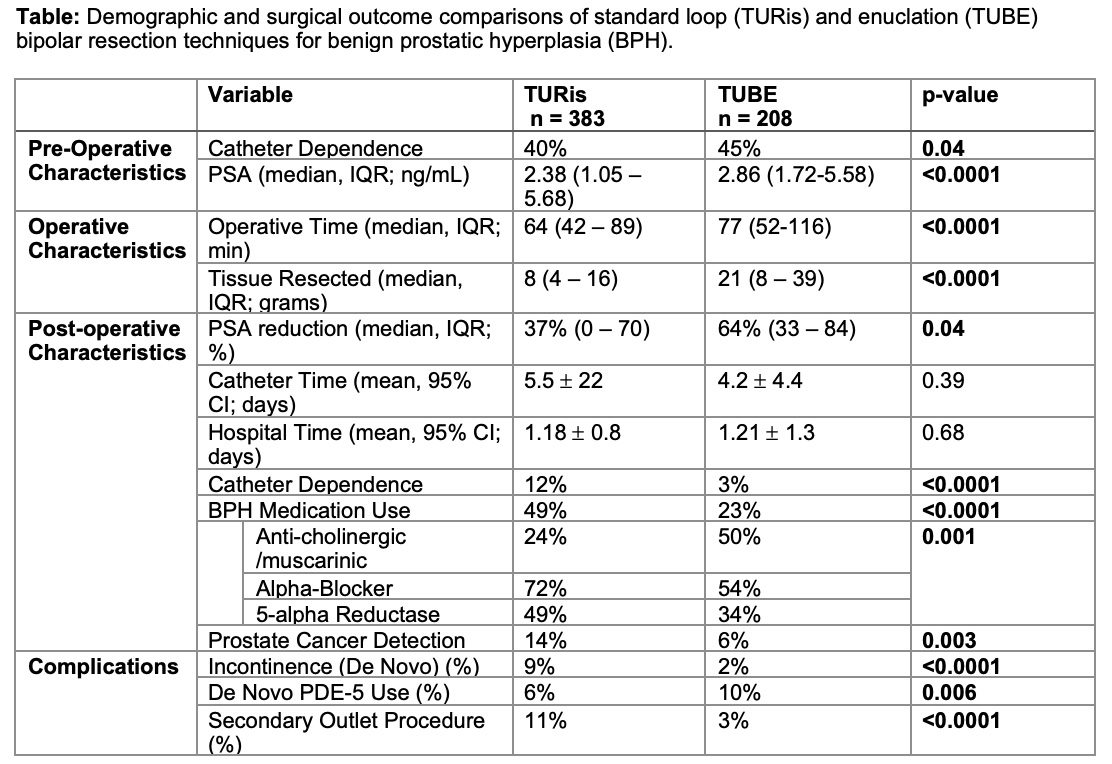