Introduction: Selecting the most suitable candidates for 68Ga-PSMA PET/CT among men with biochemical recurrence (BCR) after radical prostatectomy (RP) is of critical importance to spare low risk patients from a potentially unnecessary staging procedure. Although tools to predict a positive PSMA PET have been proposed, when to perform PSMA PET/CT based on PSA levels and time to BCR is unclear. We aimed to identify the optimal timing for PSMA PET in patients with BCR after RP based on PSA levels and time to BCR.

Methods: We retrospectively identified 207 patients evaluated with PSMA PET/CT for BCR after RP between 2016 and 2021 at single center. We investigated the association between the PSA at scan and the probability of positive imaging using multivariable logistic regression, after stratification for time to BCR (= 12 months or PSA persistence vs. > 12 months). Covariates consisted of ISUP grade group, pN and pT stages. The relationship between PSA and positive PSMA PET probability was graphically explored using the Lowess function, after stratification for time to BCR.

Results: Median PSA at PSMA PET scan was 1.0 ng/ml (IQR: 0.40-1.89). Overall, 80 patients (38%) experienced early BCR or PSA persistence after RP. When included in multivariable logistic regression models, higher PSA level at PSMA PET (OR 2.16, p=0.001) and early BCR < 12 months (OR 2.61, p=0.01) were both significantly associated with increased probability of positive PSMA PET. At Lowess analysis, in patients with early BCR, the probability of positive PSMA PET was high even at low PSA levels and progressively increased with higher PSA level, with rates ranging from 63 to 93%. Conversely, in patients with late BCR, the probability of positive PET was lower than 40% for PSA values < 0.5 ng/ml and a substantial plateau was observed PSA values higher than 1.2 ng/ml (Fig. 1).

Conclusions: PSA level at PET PSMA and time to BCR have significant impact on the probability of positive spots at PSMA PET. In patients with early PCa recurrence or PSA persistence after RP, PSMA PET should be always recommended even at low PSA levels given its high diagnostic value. Conversely, patients with late BCR may not benefit from the addition of PET PSMA scan and should be, therefore, carefully counselled based on PSA levels. 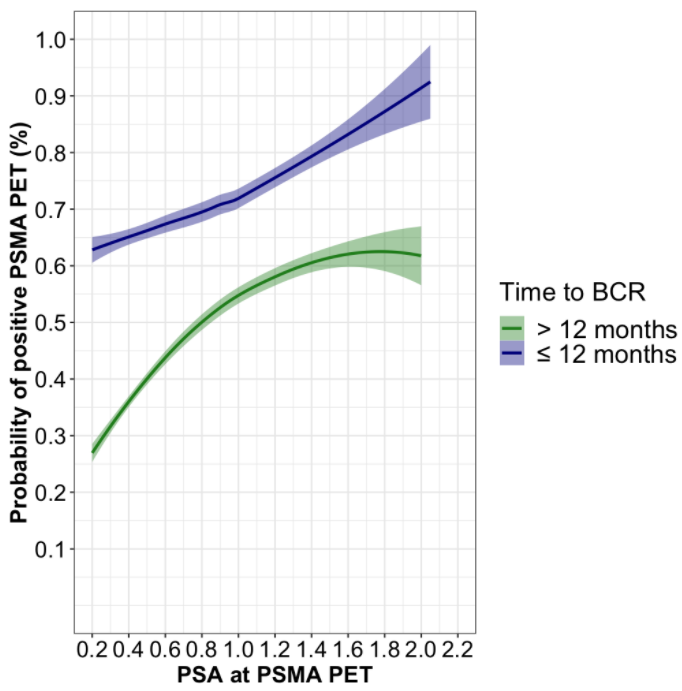