Introduction: Bipolar Radiofrequency (RF) sealing tools have been shown to be successful in the treatment of many areas in the human body.  RF has been utilized in the sealing of larger blood vessels and in nerve pain ablation in humans, showing good results for years.  Urology has used RF ablation percutaneously for treating renal tumors for years.  We evaluate the utilization of a new bipolar RF sealing tool for transdermal vasectomy in the rabbit model following AUA guidelines.

Methods: Two groups of 5 male New Zealand white rabbits were given IV sedation and local anesthetic and subsequent transdermal bilateral partial vasectomy using a high lateral scrotal approach. We isolated the vas with a novel insulated clamp fitting the U-shaped electrode of the sealing tool (Figure 1). In Group 1 (n=5), the device was set at 60W for 20s; however, this may differ across species. In the second group (n=5) the size of the U-shaped tool jaw was reduced and the device was set at 40 and 60W using thermal sensors. Impedance alarms shut off energy at a predetermined level. Wound healing, complications, survival, postmortem biopsies, and histology were evaluated. A doe rabbit was used with semen collections & semen analyses preformed on all male rabbits.

Results: We sacrificed 4 of the 5 (80%) of Group 1 rabbits due to poor wound healing secondary to excessive thermal damage.  All 5/5 (100%) of Group 2 rabbits had good tissue healing and survived the procedure. The impedance alarm went off at about 5 seconds of sealing time and the device energy shut off in all Group 2 procedures. All rabbits had a negative semen analysis and on histology had occluded vas deferens. In bench top testing, we found that a 5 second interval is optimal for vas ligation. (Figure 1)

Conclusions: Transdermal bipolar RF sealing successfully occludes the vas deferens in rabbit vasectomy. The jaw size and sealing time using an impedance alarm system appear to be important for wound healing. This novel technique may decrease vasectomy time and morbidity. Canine studies are underway and analysis is pending. Further studies and FDA approval are needed before its application in humans. 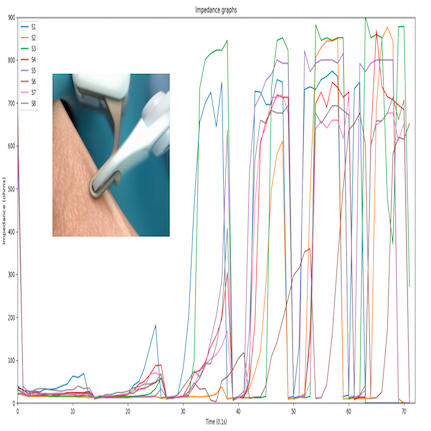