MP16-09: Determining the Prevalence of Inappropriate Patient Behavior in the Outpatient Urology Clinic

Introduction: Workplace harassment has been long recognized as a violation of Title VII of the Civil Rights Act. While many studies focus on harassment between employees, several healthcare studies have found patients to be frequent offenders. The prevalence of inappropriate patient interactions in urology has not been thoroughly studied especially among non-physician employees. Our objectives were to determine frequency and types of inappropriate patient behavior, along with frequency and barriers to reporting.

Methods: After IRB approval, a survey was created to capture employee demographics and responses to questions regarding abusive patient interactions.  A survey was emailed to all faculty and staff within the department of urology at a single institution. We excluded employees who did not interact with patients and those who worked only in the inpatient setting. All between-group comparisons were performed with Fisher’s exact test using SAS version 9.4.

Conclusions: Inappropriate patient behaviors are prevalent in the outpatient urology setting. In a subspecialty where genital examination and discussion of sexual function are commonplace, increased awareness and vigilance are required to promote a safe work environment, especially for at-risk populations. Future directions include collaborative studies with other institutions to validate our findings and determining effective interventions to minimize negative encounters. 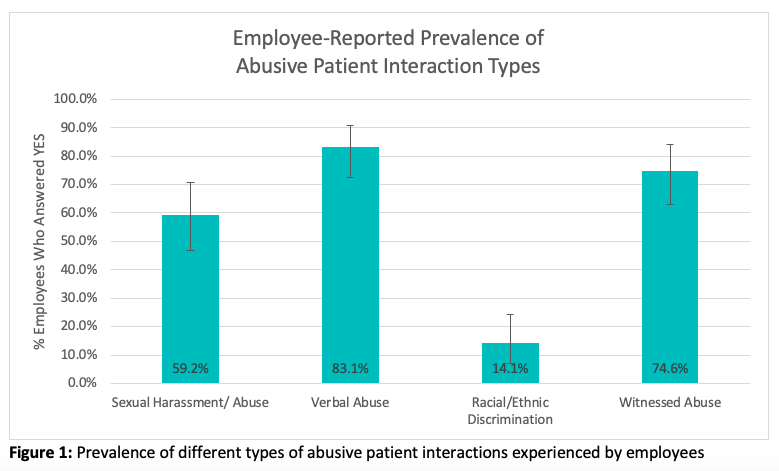