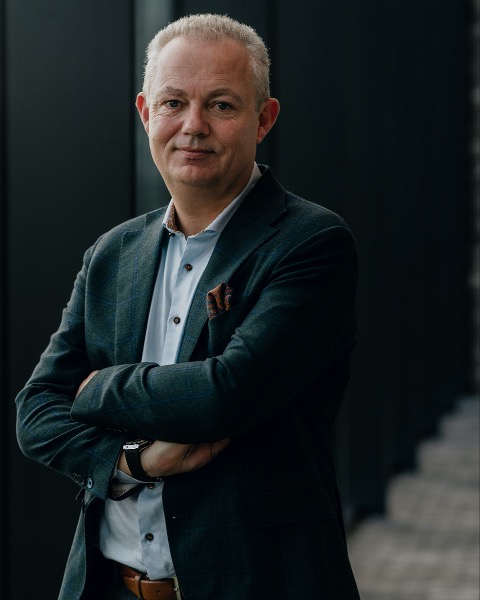 Professor Alexandre Mottrie MD PhD graduated in 1988 from the School of Medicine at the Catholic University of Leuven, Belgium. He completed his residency in Urology in 1994 at the Johannes Gutenberg University of Mainz, Germany where he was a Staff Member till 1996. Afterwards, he served as a Fellow in Washington University St.-Louis, Missouri, U.S.A. for six months to improve his laparoscopic skills. Since 1996, he is Urologist in the O.L.V.-Clinic in Aalst, Belgium. On December 5 2011, he successfully defended his Ph.D. in the University of Saarland, Homburg-Saar, Germany.
His major interests are urological oncology and minimal invasive surgery. He is a pioneer in robotic surgery and started this type of surgery in 2002. He developed different procedures in robotic surgery. He trained numerous colleagues from all over Europe and beyond in the field of robotic surgery. With over 4500 robotic procedures, he has one of the largest experiences in that field.
In 2010, Prof. Mottrie founded the ORSI-Academy, an innovation center in robotic and minimal-invasive surgery. As CEO, he is doing basic research on improving training and education in surgery.
Prof. Mottrie is scientifically very involved. He has authored multiple scientific papers and organised several international Congresses and Masterclasses in these fields. He has been actively involved in multiple congresses. Actually, he is the past-president of the EAU Robotic Urology Section (ERUS) and former president of the Society of Robotic Surgeons (SRS). He is the actual Editor of the Surgery-in-Motion Section of European Urology.
He is Associate Professor in the Universität des Saarlandes Homburg-Saar (Germany) and the University of Ghent (Belgium). He received the “Golden Telescope Award” at the Hamlyn Symposium of the Imperial College in London (20/06/2015) and the “Saint-Pauls’ medal” from BAUS in Glasgow (25/06/2019) for lifetime achievements in the robotic field.