Introduction: Robotic-assisted percutaneous nephrolithotomy (PCNL) has not been previously described.  Here we compare feasibility and safety of the novel robotic-assisted device, the Monarch® Platform, Urology (Auris Health, Inc., Redwood City, CA), to conventional devices in completing both PCNL and ureteroscopy (URS) within a porcine model.

Methods: The Monarch® Platform robotic system was compared to conventional devices used for URS  and PCNL in a live porcine model (n=12) positioned in supine lithotomy. For URS, access sheaths were placed. For PCNL, serial dilators after renal access were used.  Successful completion of distinct tasks within PCNL and URS was first assessed by two endourologists for ease of completion and scored on a Likert scale (1-4).  Sidedness was randomized between devices.  Endourologists assessed safety by identifying any intra-operative events and conducting post-procedure retrograde pyelograms. Then, tissue specimens were evaluated by a board-certified pathologist for gross and microscopic injury, and scored on a Likert scale (0-4).  Statistical comparisons were made using 1-sided Mann-Whitney U Tests, with p < 0.05 considered significant.

Results: Two endourologists performed 12 PCNL and 12 URS procedures in 24 renal units, and they observed no safety events during either the PCNL or URS procedures for both the robotic and conventional devices.  Pathology assessment demonstrated no biologically significant nor clinically-relevant differences between robotic and conventional devices in any category (Table 1A). Tasks within PCNL and URS exhibited comparable ease of completion scores between the devices (Table 1B).  These data also suggest a trend of improved ease of completion of some tasks (e.g., renal access and ureteroscope maneuverability) using the Monarch® Platform. 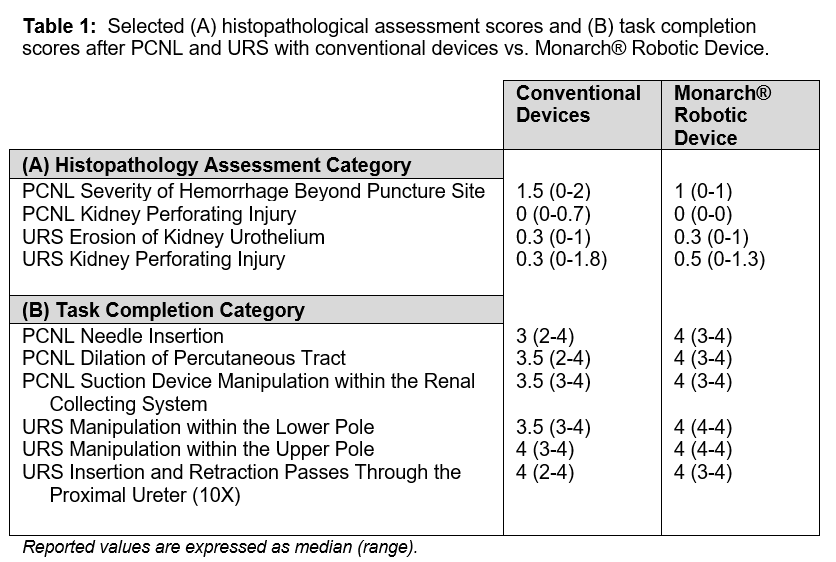