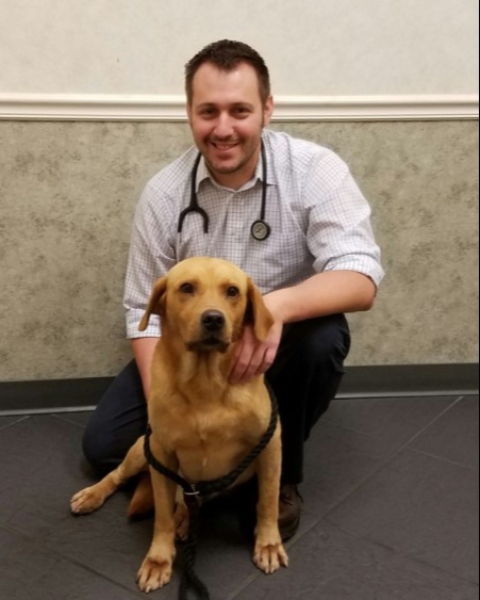 Dr. Michael A. Rossi is a native of New Orleans, Louisiana. He earned his Bachelor of Science degree from Southeastern Louisiana University in Hammond. After this, he went on to perform fellowship research with the Tulane National Primate Research Center in Covington, Louisiana working with the simian immunodeficiency virus. This further increased his interest in animal welfare and scientific research. He then went on to complete his Master's degree and Doctor of Veterinary Medicine degree at Louisiana State University in Baton Rouge. His Master’s program focused on the role of neuropeptides in equine allergic airway disease. After veterinary school, he finished a one-year rotating internship at the Regional Veterinary Referral Center in the Washington, D.C. area. Thereafter, he completed a specialized veterinary dermatology internship at the North Carolina State University College of Veterinary Medicine (NCSU-CVM) in Raleigh, NC. Upon completion of this internship, he participated in a two-year veterinary dermatology residency with NCSU-CVM and clinical work with the Veterinary Referral Center of Colorado (VRCC) in Englewood, CO. He remained on staff at VRCC following his residency before moving back to the Gulf Coast region in 2015 to open Coastal Veterinary Dermatology & Ear Clinic. He currently sees patients from as far west as San Diego, California and as far east as the pan handle of Florida. Dr. Rossi has been board certified by the American College of Veterinary Dermatology since 2014.

While not in the clinic, Dr. Rossi donates his time to treat skin conditions of animals in zoos and wildlife centers when possible. He has performed dermatology procedures on several species, including polar bears and antelope. He has authored and coauthored several scientific articles in peer-reviewed journals. His published work on a novel form of allergy testing in cats obtained national acclaim and has created a revolution with many new studies coming as a result of it. He has lectured nationally within the United States and has been invited to lecture internationally on conditions related to dermatologic diseases. He has a special interest in allergic skin disease, ear disease, neurophysiology of itch, dermatohistopathology, and autoimmune skin disease. In addition to small animals, Dr. Rossi also enjoys working with horses and zoo animals.