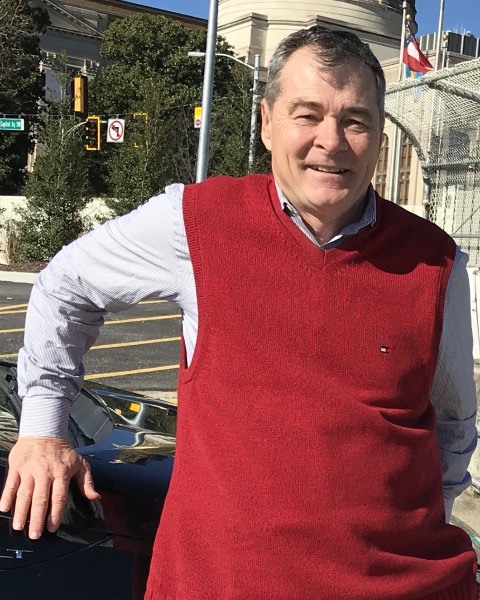 Shortly after graduating from UGA, Tim founded TeenPact, a training experience for conservative high school students. The program began at the Georgia Capitol and now operates in 45 states, having trained 50,000 students. After building TeenPact, Echols ran for and was elected to statewide office in 2010 serving as Public Service Commissioner.
The PSC's primary job is energy regulation. When Echols took office, Georgia was 34th in solar power. Now, 9 years later the state is 10th in the nation in approved solar. In 2020, Conservatives for Clean Energy dubbed Echols the "Solar Architect of Georgia."
Echols has also created the Clean Energy Roadshow that has traveled the state every summer for the last eight years. This educational event travels to cities around the state helping commuters, businesses and municipal governments evaluate alternative fuel for their transportation and residential use.
Tim has tried to lead by example. He added solar hot water heating to his Athens home just before being sworn in. He bought a natural gas car, a propane van and now owns his 6th electric car.
Tim led the PSC to increase the number of pediatric hearing aids in a program the PSC oversees.
Most recently, Tim rallied donors and the solar community to build and donate to the Hog Hammock Foundation a 16-panel solar pavilion for the community library on the remote island off Georgia’s coast. Sapelo is the home of one of the last remaining Gullah Geechee communities and this array will provide free electricity to the library for the next 30 years. With help from YellaWood, Southern Current and EDF Renewables, Echols led the way to build this lasting asset.

Tim has a weekly radio show called Energy Matters airing on Cox Media Group and back episodes can be found at WGAUradio.com/energymatters/