Functional Decline in Patient with Sjogren-Larsson Syndrome During COVID-19 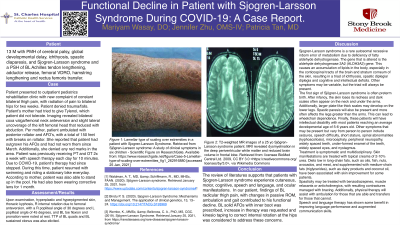 Discussions: Sjogren-Larsson syndrome is a rare AR inborn error of metabolism due to deficiency of fatty aldehyde dehydrogenase. This causes accumulation of lipids in the body, especially in the corticospinal tracts of the brain and stratum corneum of the skin resulting in a triad of ichthyosis, spastic diplegia and cognitive deficits. Treatment is symptomatic and multidisciplinary. Skin manifestations are treated with topical creams of urea. Spasticity is treated with benzodiazepines, muscle relaxants, or anticholinergics. Contractures are managed with bracing and therapies with focus on stretching, passive ROM and strengthening. Due to the COVID-19 pandemic, cessation of therapies contributed to the functional decline of this patient as displayed by findings of thigh pain, decreased ROM and ambulation. To address his functional decline, solid AFOs with inner boots, kinesiotape to correct internal rotation at the hips and aggressive therapies were prescribed to address his gait and ambulation.

Conclusions: In conclusion, cessation of rehabilitative interventions during COVID-19 has negatively impacted the functional status of this patient with Sjogren-Larsson syndrome. By resuming interventions, restoration of function is expected.