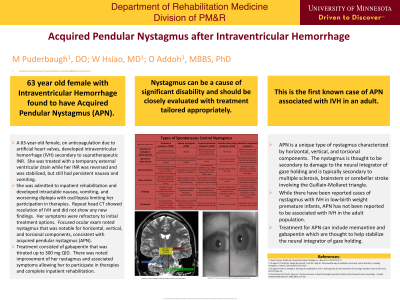 Case Description: A 63-year-old female, on anticoagulation due to artificial heart valves, developed intraventricular hemorrhage (IVH) secondary to supratherapeutic INR.  She was treated with a temporary external ventricular drain while her INR was reversed and was stabilized, but still had persistent nausea and vomiting.  She was admitted to inpatient rehabilitation and developed intractable nausea, vomiting, and worsening diplopia with oscillopsia limiting her participation in therapies.  Repeat head CT showed resolution of IVH and did not show any new findings.  Her symptoms were refractory to initial treatment options.  Focused ocular exam noted nystagmus that was notable for horizontal, vertical, and torsional components, consistent with acquired pendular nystagmus (APN).  Treatment consisted of gabapentin that was titrated up to 300 mg QID.  There was noted improvement of her nystagmus and associated symptoms allowing her to participate in therapies and complete inpatient rehabilitation.

Discussions: APN is a unique type of nystagmus characterized by horizontal, vertical, and torsional components.  The nystagmus is thought to be secondary to damage to the neural integrator of gaze holding and is typically secondary to multiple sclerosis, brainstem or cerebellar stroke involving the Guillain-Mollaret triangle.  A subsequent brain MRI was done which did not show any cerebellar or brainstem infarct.  While there have been reported cases of nystagmus with IVH in low birth weight premature infants, APN has not been reported to be associated with IVH in the adult population.  Treatment for APN can include memantine and gabapentin which are thought to help stabilize the neural integrator of gaze holding.

Conclusions: This is the first known case of APN associated with IVH in an adult.  Nystagmus can be a cause of significant disability and should be closely evaluated with treatment tailored appropriately.