Middle Cerebral Artery Stroke in an Eighteen-Year-Old as a Result of Minimal Change Disease Nephrotic Syndrome. 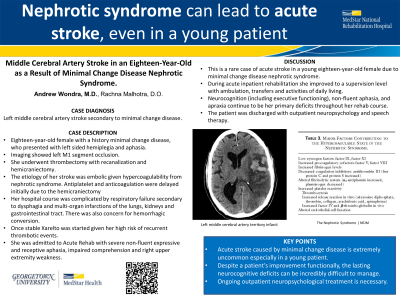 We report on an eighteen-year-old female with a past medical history of nephrotic syndrome secondary to minimal change disease who presented with left sided hemiplegia and aphasia. Imaging showed a left M1 segment occlusion. She underwent thrombectomy with recanalization and hemicraniectomy due to the high risk for cerebral edema. Her hospital course was complicated by respiratory failure secondary to dysphagia and multi-organ infarctions of the lungs, kidneys and gastrointestinal tract. The etiology of her stroke was embolic given hypercoagulability from nephrotic syndrome. Antiplatelet and anticoagulation were delayed initially due to the hemicraniectomy and then concern for hemorrhagic conversion. Once stable she was started on Xarelto given her multi-organ infarcts and high risk of recurrent thrombotic events. At the time of admission to acute inpatient rehabilitation her most notable deficits included severe non-fluent expressive and receptive aphasia, impaired comprehension and right upper extremity weakness.

This is a rare case of acute stroke in a young eighteen-year-old female due to minimal change disease nephrotic syndrome. Despite thrombectomy and hemicraniectomy the patient remained physically and neurologically impaired following her acute hospital stay. She was limited by her right sided weakness, impaired balance and coordination, as well her severe cognitive deficits and non-fluent aphasia. During acute inpatient rehabilitation she improved to a supervision level with ambulation, transfers and activities of daily living. However, she continued to be limited by neurocognitive deficits including executive functioning, non-fluent aphasia, and apraxia requiring outpatient neuropsychology and speech therapy following discharge.

Acute stroke in an eighteen-year-old female as a result of nephrotic syndrome is extremely uncommon. Despite a patients improvement functionally, the lasting neurocognitive deficits can be incredibly difficult to manage and often requires ongoing neuropsychological treatment especially in a young patient.