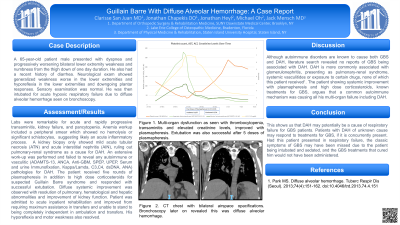 Discussions: Although autoimmune disorders are known to cause diffuse alveolar hemorrhage, literature search revealed no reports of GBS being associated with DAH. It is more commonly associated with glomerulonephritis, systemic vasculitides or exposure to certain drugs, none of which this patient received. The patient also improved with plasmapharesis and steroids, known treatments for GBS.  DAH may potentially be a cause of respiratory failure for GBS patients. This also demonstrates that patients with DAH of unknown cause may respond to treatments for GBS. Had this patient presented in respiratory failure, the classic symptoms of GBS may have been missed and the GBS treatments that made him better would not have been administered.

Conclusions: Establishing an association between GBS and DAH is important as there is currently no known reports of these two presenting concurrently. It is important to note the difficulty in assessing an intubated patient for symptoms that will suggest GBS, thus, other ways of testing for GBS, such as an EMG, may need to be performed.