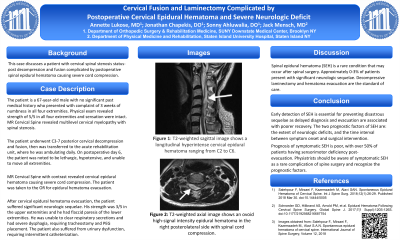 Case Description: The patient is a 67-year-old male with no significant past medical history who presented with complaint of 3 weeks of numbness in all four extremities.
Physical exam revealed strength of 5/5 in all four extremities and sensation were intact. MR Cervical Spine revealed multilevel cervical myelopathy with spinal stenosis. The patient underwent C3-7 posterior cervical decompression and fusion, then was transferred to the acute rehabilitation unit, where he was ambulating daily. On postoperative day 6, the patient was noted to be lethargic, hypotensive, and unable to move all extremities. MR Cervical Spine with contrast revealed cervical epidural hematoma causing severe cord compression. The patient was taken to the OR for epidural hematoma evacuation.

Discussions: After cervical epidural hematoma evacuation, the patient suffered significant neurologic sequelae. His strength was 3/5 in the upper extremities and he had flaccid paresis of the lower extremities. He was unable to clear respiratory secretions and had severe dysphagia, requiring tracheostomy and PEG placement. The patient also suffered from urinary dysfunction, requiring intermittent catheterization.

Conclusions: Spinal epidural hematoma (SEH) is a rare condition that may occur after spinal surgery. Approximately 0-3% of patients present with significant neurologic sequelae. Decompressive laminectomy and hematoma evacuation are the standard of care. Early detection of SEH is essential for preventing disastrous sequelae as delayed diagnosis and evacuation are associated with poorer recovery. The two prognostic factors of SEH are: the extent of neurologic deficits, and the time interval between symptom onset and surgical intervention. Prognosis of symptomatic SEH is poor, with over 50% of patients having sensorimotor deficiency post-evacuation. Physiatrists should be aware of symptomatic SEH as a rare complication of spine surgery and recognize the prognostic factors.