Lower Extremity Weakness as a Presenting Symptom of COVID-19 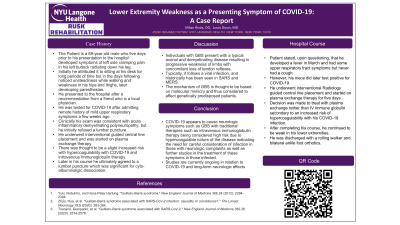 Case Diagnosis: 69 year old male who presented with five days of worsening bilateral leg weakness found to have Guillain Barre Syndrome as a complication of COVID-19.

Case Description: Five days prior to his presentation to the hospital the patient developed symptoms of left side cramping pain in his left buttock radiating down his leg. He attributed it to sitting at his desk for long periods of time but in the days following noticed unsteadiness while walking and weakness in his hips and thighs later developing paresthesias. He presented to the hospital after a recommendation from his physician friend. He was tested for COVID-19 after admitting remote history of mild upper respiratory symptoms a few weeks ago. Clinically his exam was consistent with acute inflammatory demyelinating polyneuropathy but he initially refused a lumbar puncture. He underwent interventional guided central line placement and was started on plasma exchange therapy. There was thought to be a slight increased risk with hypercoagulability with COVID-19 and intravenous Immunoglobulin therapy. He ultimately agreed to a lumbar puncture which was significant for cyto-albuminoligic dissociation.

Discussions: Individuals with GBS present with a typical axonal and demyelinating disease resulting in progressive weakness of limbs with concomitant loss of tendon reflexes. Typically it follows a viral infection, and historically has been seen in SARS and MERS. The mechanism of GBS is thought to be based on molecular mimicry and thus considered to affect genetically predisposed patients.

Conclusions: COVID-19 appears to cause neurologic symptoms such as GBS with traditional therapies such as intravenous immunoglobulin therapy being considered high risk due to hypercoagulable nature of the disease indicating the need for careful consideration of infection in those with neurologic complaints as well as further studies in the treatment of these symptoms in those infected.