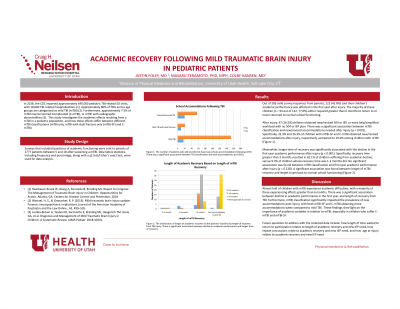 Objectives: In 2018, the CDC reported approximately 640,000 pediatric TBI-related ED visits, with 18,000 TBI-related hospitalizations (1). Approximately 80% of TBIs across age groups are categorized as mild TBI (mTBI) (2). Furthermore, approximately 7.5% of mTBI may be termed Complicated (C-mTBI), or mTBI with radiographic abnormalities. This study investigates the academic effects resulting from a mTBI in a pediatric population, and how those effects differ between different mTBI classifications (mTBI only, mTBI with skull fracture only (mTBI-SF) and C-mTBI).

Design: Surveys that included questions of academic functioning were sent to parents of 1777 patients between 5 and 18 after sustaining a mTBI. Descriptive statistics, including frequency and percentage, along with a χ2 test/Fisher’s exact test, were used for data analysis.

Results: Out of 285 valid survey responses from parents, 122 (42.8%) said their children’s academic performance was affected in the first year after injury. The majority of these children (n = 94 out of 122, 77.0%) either required greater than 6 months to return to or never returned to normal school functioning. After injury, 47 (16.5%) children obtained new/revised 504 or IEP, or extra help/simplified workload with no 504 or IEP plan. There was a significant association between mTBI classification and new/revised accommodations needed after injury (p = 0.001). Specifically, 32.3% and 26.3% of children with mTBI-SF and C-mTBI obtained new/revised accommodations after injury, respectively, compared to 10.0% among children with mTBI.

Conclusions: Almost half of children with mTBI experience academic difficulties, with a majority of these experiencing effects greater than 6 months. Length to return to normal academic functioning did not differ based on mTBI classification. However, mTBI classification did significantly impact the prevalence of new accommodations post-injury, with both mTBI-SF and C-mTBI obtaining more accommodations. This may represent a lack of help being offered to those with mTBI alone.