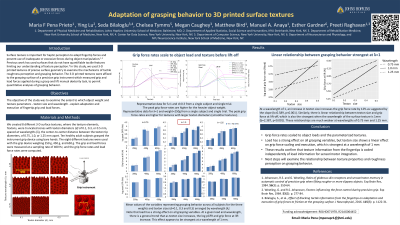 Objectives: Surface texture is important for haptic perception to adapt fingertip forces and prevent use of inadequate or excessive forces during object manipulation. Previous work has used surfaces that do not have quantifiable features limiting our understanding of texture perception. In this study, we used 3-D printed textures of precise surface geometry to examine the mechanisms of tactile roughness perception and grasping behavior.

Design: We created 8 different surface textures, where the texture elements were truncated cones with diameters of 0.1, 0.3, or 0.5 mm, spaced at wavelengths of 0.75, 1.0, or 1.25 mm apart. Here, we measured grip force adaptation during precision grasp and lift using an instrumented grip device with the 3D printed surface textures. Ten healthy adult subjects grasped the instrument using bare hands. Adaptation of fingertip forces was quantified using peak rate of change of grip forces and load forces, which are higher for smoother textures and heavier loads. Grasp execution was measured using grip force at lift. Coefficient of friction (COF) of textures, and person-specific COF at the finger-texture interface at the moment of slip (slip ratio) were also measured.

Results: We found a strong effect of load on all grasping variables. In addition, there was a linear relationship between texton size and grip force adaptation and execution which was strongest at a wavelength of 1 mm. Perception of the surface textures explained grasping behavior better than the slip ratio or the coefficient of static friction.

Conclusions: The results suggest that the sensitivity of fingertips to texture elements accounts for grasping behavior and is strongly affected by their spacing. The sensitivity to quantified texture surfaces can shed light on the mechanisms of tactile roughness perception and grasping behavior in healthy and neurologically impaired populations.