A case report of post-COVID 19 encephalopathy in a 49-year-old male, ultimately necessitating discharge to a memory unit 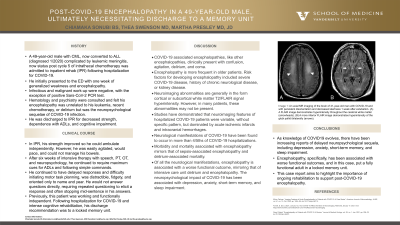 Case Description: A 49-year-old male with CML now converted to ALL (diagnosed 1/2020) complicated with leukemic meningitis, now status post cycle 5 of intrathecal chemotherapy was admitted to inpatient rehab (IPR) following hospitalization for COVID19.  He presented to the ED with one week of generalized weakness and encephalopathy. Infectious and malignant work-up were negative, with the exception of positive Sars-CoV-2 PCR test. Hematology and psychiatry were consulted and felt his encephalopathy was unrelated to his leukemia, recent chemotherapy, or delirium but was the neuropsychological sequelae of COVID19 infection. He was discharged to IPR for decreased strength, dependence with ADLs, and cognitive impairment.

Discussions: During IPR, his strength improved so he could ambulate independently. However, he was agitated, would pace, and could not manage his bowels. After six weeks of intensive therapy with speech, PT, OT, and neuropsychology, he continued to require maximum cues for ADLs and following simple commands. He continued to have delayed responses and difficulty initiating motor task planning, was distractible, fidgety, and oriented only to name and year. He would not answer questions directly, requiring repeated questioning to elicit a response and often stopping mid-sentence in his answers. His cognitive ability seemed like that of a 2-3 year old.

Conclusions: Previously, this patient was working and functionally independent. Following hospitalization for COVID19 and intense cognitive rehabilitation, his discharge recommendation was to a locked memory unit. As knowledge of COVID19 evolves, there have been more reports of delayed neuropsychological sequela, including depression, anxiety, short-term memory and sleep impairment. Encephalopathy, specifically, has been associated with worse functional outcomes, and in this case, put a fully functional adult in a locked memory unit. This case report aims to highlight the importance of ongoing rehabilitation to support post-COVID19 encephalopathy.