Man In A Barrel Syndrome after Deep Brain Stimulation Procedure: A Case Report 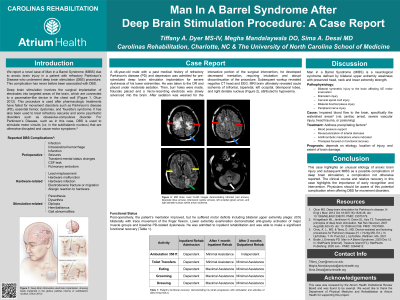 Case Diagnosis: Deep brain stimulation (DBS) involves implantation of electrodes into targeted areas of the brain and is used to treat various movement disorders. Although it can lead to surgical complications, there are no known reports of anoxic brain injury, resulting in man in a barrel syndrome (MIBS).

Conclusions: This case highlights an unusual etiology of anoxic brain injury and subsequent MIBS as a possible complication of DBS that physicians should be aware of when offering DBS for movement disorders.