Chronic Confabulatory State in a Man with Traumatic Brain Injury: A Case Report. 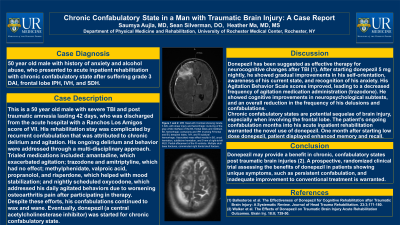 This is a 50 year old male with severe TBI and post traumatic amnesia lasting 42 days, who was discharged from the acute hospital with a Ranchos Los Amigos score of VII. His rehabilitation stay was complicated by recurrent confabulation that was attributed to chronic delirium and agitation. His ongoing delirium and behavior were addressed through a multi-disciplinary approach. Trialed medications included: amantadine, which exacerbated agitation; trazodone and amitriptyline, which had no effect; methylphenidate, valproic acid, propranolol, and risperdone, which helped with mood stabilization; and nightly scheduled oxycodone, which addressed his daily agitated behaviors due to worsening osteoarthritis pain after participating in therapy. Despite these efforts, his confabulations continued to wax and wane. Eventually, donepezil (a central acetylcholinesterase inhibitor) was started for chronic confabulatory state.

After starting donepezil 5 mg nightly, he showed gradual improvements in his self-orientation, awareness of his current state, and recognition of his anxiety. His Agitation Behavior Scale scores improved, leading to a decreased frequency of agitation medication administration (trazodone). He showed cognitive improvements in neuropsychological subtests, and an overall reduction in the frequency of his delusions and confabulations.
Chronic confabulatory states are potential sequelae of brain injury, especially when involving the frontal lobe. The patient’s ongoing confabulation months into his acute inpatient rehabilitation warranted the novel use of donepezil. One month after starting low dose donepezil, patient displayed enhanced memory and recall.

Donepezil may provide a benefit in chronic, confabulatory states post traumatic brain injuries. A prospective, randomized clinical trial assessing the benefits of donepezil in patients showing unique symptoms, such as persistent confabulation, and inadequate improvement to conventional treatments is warranted.