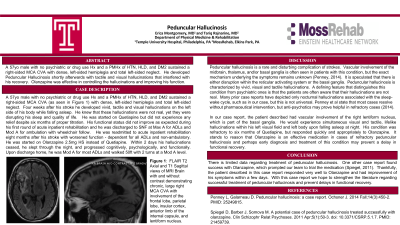 Case Description: A 57-year-old male without psychiatric or drug use history sustained a right-sided middle cerebral artery stroke.  The presenting feature was dense, left-sided hemiplegia with total left-sided neglect.  Four weeks later he developed vivid nocturnal, visual, and tactile hallucinations.  Despite six months of adequate titration of Seroquel, Cymbalta, and Depakote his cognitive, psychological, and functional status further declined.  Eight months after his stroke he again required acute inpatient rehabilitation.  He was non-ambulatory and dependent for all activities of daily living (ADLs).  Olanzapine 2.5mg HS was started to control his hallucinations and within two days his hallucinations ceased.  He was able to sleep throughout the night and participate in daytime therapy. He was discharged home on Olanazpine 2.5mg HS and he completed his ADLs at a supervision to moderate assistance (ModA) level and walked ten feet at ModA.

Conclusions: Olanzapine is an effective treatment modality for Peduncular Hallucinosis when other modalities of treatment have failed.