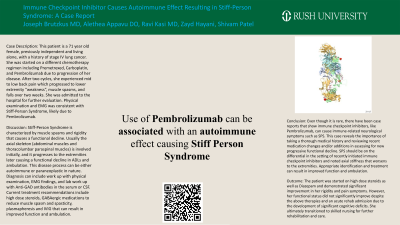 Case Description: This patient is a 71 year old female, previously independent and living alone, with a history of stage IV lung cancer. She was being treated with a different chemotherapy regimen from her normal including Premetrexed, Carboplatin, and Pembrolizumab due to progression of her disease. After two cycles, she experienced mid to low back pain which progressed to lower extremity “weakness”, muscle spasms, and falls over two weeks. She was admitted for work up and physical examination and EMG revealed Stiff-Person Syndrome, likely due to Pembrolizumab.

Discussions: Stiff-Person Syndrome is characterized by muscle spasms and rigidity that causes a functional decline. Usually the axial skeleton (abdominal muscles and thoracolumbar paraspinal muscles) is involved initially, and it progresses to the extremities later causing a functional decline in both ADLs and ambulation. This disease process can be either autoimmune or paraneoplastic in nature. Diagnosis can include work up with physical examination, EMG findings, and lab work up with Anti-GAD antibodies in the serum or CSF. Treatment with IVIG can result in improved function and ambulation.

Conclusions: Even though it is rare, there have been case reports that show immune checkpoint inhibitors, like Pembrolizumab, can cause an immune-related neurological symptoms such as SPS. This reveals the importance of medical history and recent medication changes and/or additions in assessing for new progressive functional decline. SPS should be on the differential in the setting of recently initiated immune checkpoint inhibitors and noted axial stiffness that worsens to the extremities. Appropriate identification and treatment results in improved function and ambulation.