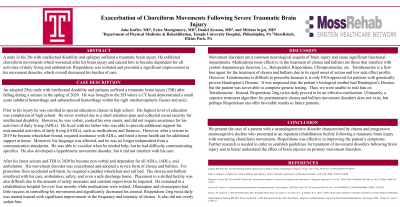 Case Description: 29-year-old adopted male with past medical history of intellectual disability and epilepsy suffered a severe, closed traumatic brain injury after falling during a seizure.
Prior to his brain injury he had been declining neurocognitively and developed choreiform movements. He lost the ability to ambulate but was still performing his activities of daily living with assistance. His family declined genetic testing.
After his brain injury he was transferred to an acute inpatient rehabilitation facility where he was noted to be dependent for all activities of daily living. He exhibited frequent choreiform movements manifested by violent, flailing motions of the upper and lower extremities. He was trialed on olanzapine and clonazepam with little success. Risperidone was initiated and at 2 mg twice daily provided significant improvement in frequency and intensity of chorea. His burden of care decreased with no change in arousal.

Discussions: Movement disorders are a common neurological sequela of brain injury. Chorea and ballism occur less frequently than other movement disorders. Currently, there are no guidelines or consensus on how to treat chorea in brain injury patients, although clonazepam and antipsychotics have shown some effectiveness. To the authors’ knowledge there have been no case reports describing the effects brain injury has on patients with a primary movement disorder.

Conclusions: We present the case of a patient with a neurodegenerative disorder characterized by chorea which was exacerbated by traumatic brain injury, leading to a decline in function. Risperidone was effective in improving the patient’s symptoms and decreasing the burden of care. Further research is needed in order to establish guidelines for treatment of movement disorders following brain injury and to better understand the effect of brain injuries on primary movement disorders.