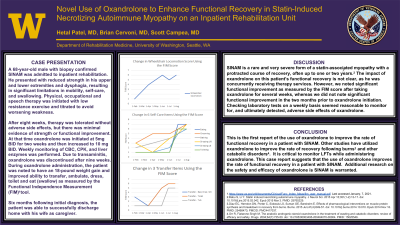 Case Description: A 68-year-old male with biopsy confirmed SINAM was admitted to inpatient rehabilitation. He presented with reduced strength in his upper and lower extremities and dysphagia, resulting in significant limitations in mobility, self-care, and swallowing. Physical, occupational and speech therapy was initiated with low resistance exercise and titrated to avoid worsening weakness. After eight weeks, therapy was tolerated without adverse side effects, but there was minimal evidence of strength or functional improvement. At that time oxandrolone was initiated at 5mg BID for two weeks and then increased to 10mg BID. Weekly monitoring of CBC, CPK, and liver enzymes was performed. Due to transaminitis, oxandrolone was discontinued after nine weeks. During oxandrolone administration, the patient was noted to have an 18-pound weight gain and improved ability to transfer, ambulate, dress, toilet and swallow. Six months following initial diagnosis, the patient was able to successfully discharge home with his wife as caregiver.

Discussions: SINAM is a rare and very severe form of a statin-associated myopathy with a protracted course of recovery, often up to one or two years. The impact of oxandrolone on this patient’s functional recovery is not clear, as he was concurrently receiving therapy services. However, we did not note significant functional improvement in the two months prior to oxandrolone initiation. Checking laboratory tests on a weekly basis seemed reasonable to monitor for, and ultimately detected, adverse side effects of oxandrolone in this patient.

Conclusions: This is the first report of the use of oxandrolone to improve the rate of functional recovery in a patient with SINAM. It is critical to monitor LFTs while administering oxandrolone. Additional research on the safety and efficacy of oxandrolone in SINAM is warranted.