A Unique Presentation of Autonomic Dysautonomia Requiring a Pacemaker in a Teenager with Acute Motor and Sensory Axonal Neuropathy: A Case Report 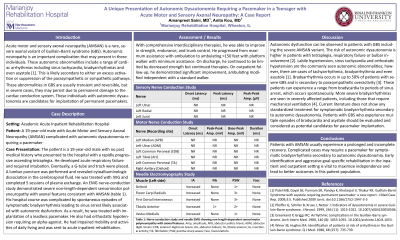 Case Description: The patient is a 19-year-old male with no past medical history who presented to the hospital with a rapidly progressive ascending tetraplegia. He developed acute respiratory failure and required intubation. Eventually, a G-tube and trach were placed. A lumbar puncture was performed and revealed cytoalbuminologic dissociation in the cerebrospinal fluid. He was treated with IVIG and completed 5 sessions of plasma exchange. EMG nerve-conduction study demonstrated severe non-length-dependent sensorimotor polyneuropathy with axonal features consistent with AMSAN. His hospital course was complicated with spontaneous episodes of symptomatic bradyarrhythmia leading to sinus arrest likely associated with autonomic dysfunction. As a result, he was treated with implantation of a leadless pacemaker. He had impaired mobility and activities of daily living and sent to acute inpatient rehabilitation.

Discussions: AMSAN is a rare, severe axonal variant of Guillain-Barré syndrome (GBS). Autonomic abnormalities in GBS are usually transient and reversible, but in severe cases, they may be persistent due to permanent damage to the cardiac conduction system. These individuals are candidates for implantation of permanent pacemakers. Due to his autonomic dysfunction, he also had orthostatic hypotension requiring an alpha-agonist. With comprehensive interdisciplinary therapies, he was able to improve in strength, endurance, and trunk control. He progressed from maximum assistance with ambulation to ambulating >150 feet with platform walker with minimum assistance. On discharge, he continued to be limited by decreased strength but continued therapies. On outpatient follow-up, he demonstrated significant improvement, ambulating modified independent with a standard walker.

Conclusions: Patients with AMSAN usually experience a prolonged and incomplete recovery. Complicated cases may require a pacemaker for symptomatic bradycardia secondary to dysautonomia.  Early identification and aggressive goal-specific rehabilitation in the inpatient and outpatient setting is vital to maximize independence and lead to better outcomes.