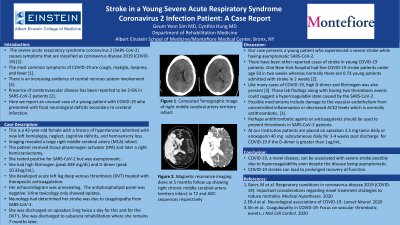 Case Description: This is a 42 year old female admitted with acute onset left hemiplegia. She only had a history of hypertension. Imaging revealed a large right middle cerebral artery (MCA) infarct from right internal carotid artery to MCA occlusion. The patient received tissue plasminogen activator (tPA)  and later on a right hemicraniectomy. She tested positive for severe acute respiratory syndrome coronavirus 2 (SARS-CoV-2), but did not have fever or respiratory symptoms. Her labs further revealed high fibrinogen and D-dimer. Her course was further complicated by acute left leg deep venous thrombosis (DVT) while on DVT prophylaxis after an initial negative doppler. It was treated with therapeutic anticoagulation. Her echocardiogram was unrevealing. She did not have antiphospholipid syndrome. Neurology had decided that her stroke was due to coagulopathy from SARS-CoV-2. She was transferred to subacute rehabilitation for further management.

Discussions: Our case presents a patient who experienced a stroke while having asymptomatic SARS-CoV-2, a new disease that first appeared at the end of 2019. There have been other reported cases of stroke in young SARS-CoV-2 patients and research shows that there are more strokes in people younger than 50 years old if you have SARS-CoV-2. Like many cases of SARS-CoV-2, high D-dimer and fibrinogen was also present. These lab findings along with having two thrombosis events could suggest a hypercoagulable state caused by the SARS-CoV-2. Studies have shown increased risk of thrombosis in the setting of SARS-CoV-2 manifesting amongst others as stroke or DVT. Possible mechanisms include damage to the vascular endothelium from uncontrolled inflammation or decreased ACE2 levels which is normally antithrombotic. Perhaps antithrombotic agents or anticoagulants should be used to prevent thrombosis in SARS-CoV-2 patients.

Conclusions: SARS-CoV-2, a novel disease, can be associated with stroke possibly due to hypercoagulability.