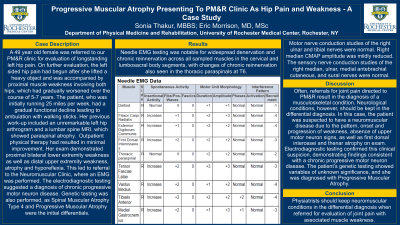 Case Description: A 49 year old female was referred to our PM&R clinic for evaluation of longstanding left hip pain. On further evaluation, the left sided hip pain had begun after she lifted a heavy object and was accompanied by proximal muscle weakness involving both hips which had gradually worsened over the course of 5-7 years. The patient, who was initially running 25 miles per week, had a gradual functional decline leading to ambulation with walking sticks. Her previous work-up included an unremarkable left hip arthrogram and a lumbar spine MRI, which showed paraspinal atrophy. Outpatient physical therapy had resulted in minimal improvement. Her exam demonstrated proximal bilateral lower extremity weakness as well as distal upper extremity weakness, atrophy and hyporeflexia. This led to further electrodiagnostic testing that suggested a diagnosis of progressive muscular atrophy versus adult onset spinal muscular atrophy.

Discussions: Often, referrals for joint pain directed to PM&R result in the diagnosis of a musculoskeletal condition. Neurological conditions, however, should be kept in the differential diagnosis. In this case, the patient was suspected to have a neuromuscular disease due to the pattern, onset and progression of weakness as well as the paraspinal muscle atrophy on imaging and first dorsal interossei and thenar atrophy on exam. Electrodiagnostic testing confirmed this clinical suspicion demonstrating findings consistent with a chronic progressive motor neuron disease. The patient has since been referred for genetic testing.

Conclusions: Physiatrists should keep neuromuscular conditions in the differential diagnosis when referred for evaluation of joint pain with associated muscle weakness.