Aging with a Traumatic Brain Injury 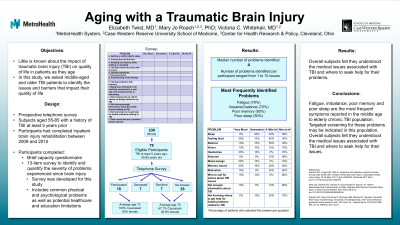 Objectives: The purpose of this study was to explore the impact of traumatic brain injury (TBI) on quality of life in middle-aged to elderly TBI patients who are at least 5 years post-injury.

Design: A prospective telephone survey was conducted with subjects aged 55-85 with a history of TBI at least 5 years prior. All subjects had completed inpatient brain injury rehabilitation between 2009 and 2015. Participants completed a 13-item survey to identify and quantify the severity of problems experienced since brain injury. The survey was developed for this study and includes common physical and psychological problems as well as potential healthcare and education limitations.

Results: Of 230 charts screened, 79 subjects met the eligibility criteria, and 10 agreed to participate. Of the 69 who did not participate, 55 did not answer the telephone, 7 declined, and 7 were found to be deceased. The participants were an average age of 73, 100% caucasian, and 40% female. The median number of issues that subjects identified as a problem was 4. The four issues most frequently identified as problems were fatigue (70% of participants), impaired balance (70%), poor memory (60%), and poor sleep (50%). Of the issues identified 54% were “a little bit of a problem”, 19% were “somewhat a problem”, and 27% were “very much a problem”. Overall subjects felt they understood the medical issues associated with TBI and where to seek help for their issues. Patients identified frustration and anxiety as being insufficiently covered in the questionnaire.