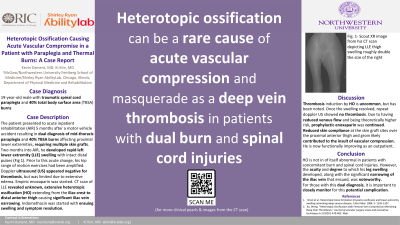 Case Description: The patient endured a motor vehicle accident resulting in mid-thoracic paraplegia, along with 40% total body surface area burns predominantly affecting his proximal lower extremities and requiring multiple skin grafts. He presented 5 months after his injury to acute inpatient rehabilitation. Two months into his stay, he developed rapid left lower extremity swelling, with his left thigh becoming grossly double the size of the right. Distal pulses remained intact. Prior to this acute change, his range of motion exercises had been amplified. A stat doppler ultrasound appeared negative for venous thrombosis, but was limited due to edema so empiric enoxaparin was started. A CT scan revealed unknown, extensive heterotopic ossification (HO) ranging from the iliac crest to the distal anterior thigh causing significant iliac vein narrowing. Indomethacin was started with ensuing resolution of swelling and symptoms.

Discussions: Induction of thrombosis by HO is uncommon but has been noted. Once his swelling resolved, a repeat ultrasound showed no thrombosis and enoxaparin was stopped. He is now functionally improving in outpatient therapy with noted advancements in hip range of motion.

Reduced skin compliance from the specific location of his lower extremity burns likely contributed to the insult of vascular compression. HO in a patient with SCI and burn injuries is not in of itself abnormal; but the acuity and degree to which his leg swelling developed, along with the significant amount of narrowing of the iliac vein that ensued was noteworthy.

Conclusions: Vascular compression secondary to unknown HO is a rare cause of acute leg swelling and can be difficult to differentiate from a thrombosis. In patients with concomitant burn and spinal cord injuries, it is possible for HO to go undiagnosed until dramatic symptoms are present.