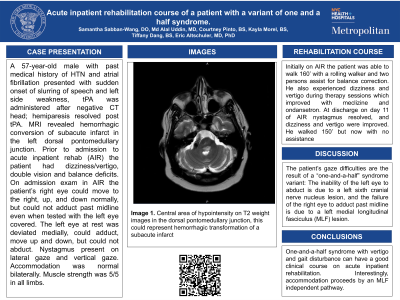 Case Description: A 57-year-old male with past medical history of HTN and atrial fibrillation presented with sudden onset of slurring of speech and left side weakness, tPA was administered after negative CT head; hemiparesis resolved post tPA. MRI revealed hemorrhagic conversion of subacute infarct in the left dorsal pontomedullary junction. Prior to admission to acute inpatient rehab (AIR) the patient had dizziness/vertigo, double vision and balance deficits. On admission exam in AIR the patient’s right eye could move to the right, up, and down normally, but could not adduct past midline even when tested with the left eye covered. The left eye at rest was deviated medially, could adduct, move up and down, but could not abduct. Nystagmus present on lateral gaze and vertical gaze. Accommodation was normal bilaterally. Muscle strength was 5/5 in all limbs.

Discussions: Initially on AIR the patient was able to walk 160’ with a rolling walker and two persons assist for balance correction. He also experienced dizziness and vertigo during therapy sessions which improved with meclizine and ondansetron. At discharge on day 11 of AIR nystagmus resolved, and dizziness and vertigo were improved. He walked 150’ but now with no assistance. The patient’s gaze difficulties are the result of a “one-and-a-half” syndrome variant: The inability of the left eye to abduct is due to a left sixth cranial nerve nucleus lesion, and the failure of the right eye to adduct past midline is due to a left medial longitudinal fasciculus (MLF) lesion.

Conclusions: One-and-a-half syndrome with vertigo and gait disturbance can have a good clinical course on AIR. Interestingly, accommodation proceeds by an MLF independent pathway.