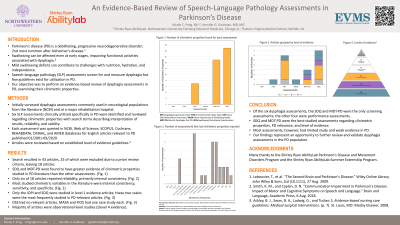 Objectives: Parkinson’s disease (PD), a neurodegenerative disorder, can affect swallowing even at early stages. While speech-language pathology (SLP) assessments screen for and measure swallowing deficits, few guidelines exist for their utilization specifically in PD. Our objective was to perform an evidence-based review of dysphagia assessments in PD, examining their clinimetric properties.

Design: We initially surveyed dysphagia assessments commonly used in neurological populations from the literature (NCBI) and at a major rehabilitation hospital. We identified six SLP assessments clinically utilized specifically in PD, which were reviewed regarding clinimetric properties with search terms describing interpretation of results, reliability, and validity. Each assessment was queried in NCBI, Web of Science, SCOPUS, Cochrane, REHABDATA, CINAHL, and AMED databases for English articles relevant to PD published 01/2001-09/2020. Articles were reviewed based on established level of evidence guidelines.

Results: Our search resulted in 43 articles, 25 of which were excluded due to a priori review criteria, leaving 18 articles. The Swallowing Disturbance Questionnaire (SDQ) and Munich Dysphagia Test-PD (MDT-PD) demonstrated greater clinimetric evidence in PD than the other assessments. Only the Iowa Oral Performance Instrument and SDQ were studied in level 1 evidence articles; these two scales were the most frequently studied in PD-relevant articles. The Dysphagia Supervision Scale did not have any relevant articles, and the Mann Assessment of Swallowing Ability and Functional Oral Intake Scale had one relevant case study each. The majority of articles were observational level studies (>level 4 evidence). Only 6/18 articles reported reliability, primarily internal consistency. Internal consistency, sensitivity, and specificity were the most studied clinimetric variables.

Conclusions: The SDQ and MDT-PD were the best-studied dysphagia assessments regarding clinimetric properties, PD relevance, and level of evidence. Most assessments, however, had limited study and weak evidence in PD. Our findings represent an opportunity to further review and validate dysphagia assessments in the PD population.