Influence of Gender, Co-morbidities, and Prone Position on Outcomes of COVID-19 Patients who were Intubated 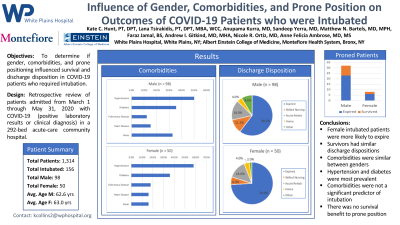 Objectives: To determine if gender comorbidities, and prone positioning influenced survival and discharge disposition in COVID-19 patients who were intubated.

Design: Retrospective review of patients admitted from March 1 through May 31, 2020 with COVID-19 (positive laboratory results or clinical diagnosis) in a 292-bed acute-care hospital.

Conclusions: Female patients were more likely to expire following intubation; however, surviving patients had similar discharge dispositions. Co-morbidities were similar between males and females with hypertension and diabetes being the most prevalent. Co-morbidities are not a significant predictor of intubation. Interestingly, patients who were placed in prone position did not have a survival benefit.