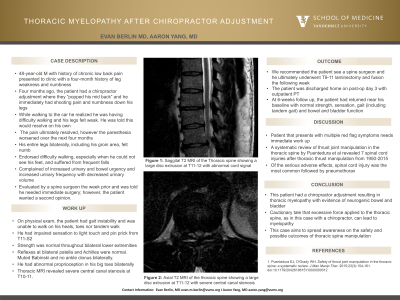 Case Description: 48-year-old gentleman with history of chronic low back pain presented to clinic with a four-month history of leg weakness and numbness. Four months ago, the patient had a chiropractor adjustment where they “popped his mid back” and he immediately had shooting pain and numbness down his legs. While walking to the car he realized he was having difficulty walking and his legs felt weak. The pain ultimately resolved, however the paresthesia worsened over the next four months. His entire legs bilaterally, including his groin area, felt numb. He had difficulty walking, especially when he cannot see his feet like while using stairs, and suffered from frequent falls. He complained of increased urinary and bowel urgency and increased urinary frequency with decreased urinary volume. The patient saw a spine surgeon the week prior and was told he needed immediate surgery; however, the patient wanted a second opinion.

Discussions: On physical exam, the patient had gait instability and was unable to walk on his heals, toes nor tandem walk. He had impaired sensation to light touch and pin prick from T11-S2. Strength was normal throughout bilateral lower extremities and reflexes at bilateral patella and Achilles were normal. He had muted Babinski and no ankle clonus bilaterally. He had abnormal proprioception in his big toes bilaterally. Thoracic MRI revealed severe central canal stenosis at T10-11. We recommended the patient see a spine surgeon and ultimately underwent T9-11 laminectomy and fusion the following week.

Conclusions: This patient had a chiropractor adjustment resulting in thoracic myelopathy with evidence of neurogenic bowel and bladder. A systematic review of thrust joint manipulation in the thoracic spine by Puentedura et al revealed 7 spinal cord injuries after thoracic thrust manipulation from 1950-2015. This case aims to spread awareness on the safety and possible outcomes of thoracic spine manipulation.