Bovis in the Blood: A Case of Ischemic Stroke Caused by Streptococcus Bovis Infective Endocarditis 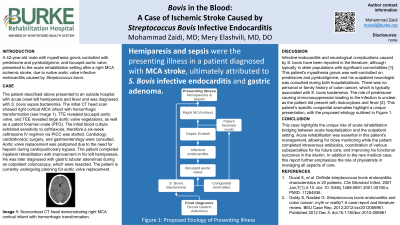 Case Diagnosis: A 42-year-old male with myasthenia gravis controlled with prednisone and pyridostigmine, and bicuspid aortic valve presented to the acute rehabilitation setting after a right MCA ischemic stroke, due to native aortic valve infective endocarditis caused by Streptococcus bovis.

Case Description: A 42-year-old male with the aforementioned past medical history presented to an outside hospital with acute left-sided weakness and fever, and diagnosed with severe sepsis due to infective endocarditis caused by S. bovis. Echocardiogram showed large native aortic valve vegetations and a PFO. CT head revealed a right MCA infarct, likely from septic cardiac emboli, with small hemorrhagic conversion. Cardiology, cardiothoracic surgery, and gastroenterology were consulted. Aortic valve replacement was postponed due to the need for heparin during cardiopulmonary bypass. Blood cultures reported sensitivity to ceftriaxone, and the patient had a PICC for long-term antibiotics. The patient has follow-up appointments to evaluate for colon cancer and valve replacement timing.

Discussions: Infective endocarditis and neurological complications caused by S. bovis have been reported in the literature, although typically in older populations with significant comorbidities. This patient's myasthenia gravis was well-controlled on prednisone and pyridostigmine, and his outpatient neurologist was consulted during both hospitalizations. There was no personal or family history of colon cancer, which is typically associated with S. bovis bacteremia. The role of prednisone causing immunosuppression leading to the infection is unclear, as the patient did present with leukocytosis and fever.

Conclusions: This case highlights the unique role of acute rehabilitation bridging between acute hospitalization and the outpatient setting. Acute rehabilitation was essential in this patient's management, allowing for close monitoring while the patient completed intravenous antibiotics, coordination of various subspecialties for his future care, and improving his functional outcomes in the interim. In addition to the rare medical case, this report further emphasizes the role of physiatrists in managing all aspects of care.