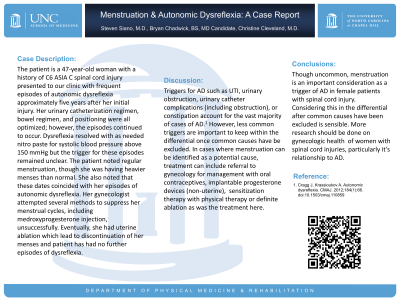 Case Diagnosis: Autonomic dysreflexia as a result of menstruation

Case Description: The patient is a 31-year-old woman with a history of C4 ASIA B spinal cord injury secondary to a fall who presented to our clinic with frequent episodes of autonomic dysreflexia (AD) approximately two years after her initial injury. Her urinary catheterization regimen, bowel regimen, and positioning were all optimized; however, the episodes continued to occur. AD resolved with as needed nitro paste for systolic blood pressure above 150 mmHg but the trigger for these episodes remained unclear. The patient noted regular menstruation, and that these dates coincided with her episodes of AD. Her gynecologist attempted several methods to suppress her menstrual cycles, including medroxyprogesterone injection, unsuccessfully. Ultimately, she was referred to physical therapy for sensitization treatment, which has significantly decreased the number of episodes.

Discussions: Triggers for AD such as UTI, urinary obstruction, urinary catheter complication, or constipation account for the vast majority of cases of AD. However, less common triggers are important to keep within the differential once common causes can be excluded. Options for treatment can include gynecologic management with oral contraceptives or intrauterine devices, or sensitization therapy for those who would like to continue to have menstrual cycles.

Conclusions: Though uncommon, menstruation is an important consideration as a trigger of AD in female patients with spinal cord injury. Considering this in the differential after common causes have been excluded is sensible. More research should be done on gynecologic health  of women with spinal cord injuries, particularly it’s relationship to AD.