A Rare Form of Blindness (Anton’s Syndrome) due to Multifocal Strokes: A Case Report 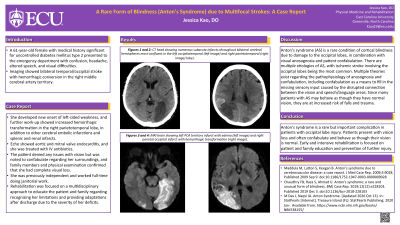 Case Description: The patient had a history of uncontrolled diabetes mellitus type 2 and presented with confusion, headache, altered speech, and visual difficulties. Imaging showed bilateral temporal/occipital stroke with hemorrhagic conversion in the right middle cerebral artery territory. She developed new onset of left-sided weakness, and further work-up showed increased hemorrhagic transformation in the right parietotemporal lobe, in addition to other cerebral embolic infarctions and splenic and renal infarcts. Echo showed aortic and mitral valve endocarditis, and she was treated with IV antibiotics. The patient denied any issues with vision but was noted to confabulate regarding her surroundings, and family members and physical examination confirmed that she had complete visual loss. She was previously independent and worked full-time doing janitorial work. Rehabilitation was focused on a multidisciplinary approach to educate the patient and family regarding recognizing her limitations and providing adaptations after discharge due to the severity of her deficits.

Discussions: Anton’s syndrome (AS) is a rare condition of cortical blindness due to damage to the occipital lobes, in combination with visual anosognosia and patient confabulation. There are multiple etiologies of AS, with ischemic stroke involving the occipital lobes being the most common. Multiple theories exist regarding the pathophysiology of anosognosia and confabulation, including confabulation as a means to fill in the missing sensory input caused by the disrupted connection between the vision and speech/language areas. Since many patients with AS may behave as though they have normal vision, they are at increased risk of falls and trauma.

Conclusions: Anton’s syndrome is a rare but important complication in patients with occipital lobe injury. Patients present with vision loss and often confabulate and behave as though their vision is normal. Early and intensive rehabilitation is focused on patient and family education and prevention of further injury.