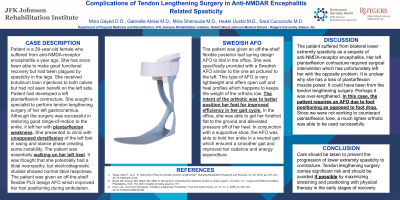 Case Description: Patient is a 29-year-old female who suffered from anti-NMDA-receptor encephalitis a year ago. She has since been able to make good functional recovery but had been plagued by spasticity in the legs. She received botulinum toxin injections to both calves but had not seen benefit on the left side. Patient had developed a left plantarflexion contracture. She sought a specialist to perform tendon lengthening surgery of her left gastrocnemius. Although the surgery was successful in restoring good range-of-motion to the ankle, it left her with plantarflexion weakness. She presented to clinic with unopposed dorsiflexion of the left foot in swing and stance phase creating some instability. The patient was essentially walking on her left heel. It was thought that she potentially had a tibial neuropathy, but electrodiagnostic studies showed normal tibial responses. The patient was given an off-the-shelf flexible PLS design AFO which improved her foot positioning during ambulation.

Discussions: The patient suffered from bilateral lower extremity spasticity as a sequela of anti-NMDA-receptor encephalitis. Her left plantarflexion contracture required surgical intervention which has unfortunately left her with the opposite problem. It is unclear why she has a loss of plantarflexion muscle power. It could have been from the tendon lengthening surgery. Perhaps it was over-lengthened. In this case, the patient requires an AFO due to foot positioning as opposed to foot drop.

Conclusions: Care should be taken to prevent the progression of lower extremity spasticity to contracture. Tendon lengthening surgery carries significant risk and should be avoided if possible.