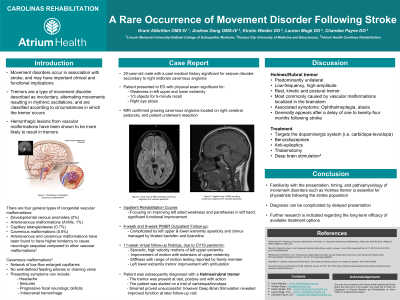 Case Description: A twenty year old male with past medical history of seizure disorder secondary to right midbrain cavernous angioma presented following an episode of witnessed seizure activity after a seizure free period for ten years. Review of systems revealed frontal headache and left upper extremity weakness, physical exam revealed left hemiparesis and right eye ptosis. CT revealed hemorrhage of known cavernous angioma. MRI displayed growth in size of the hemangioma, and the patient underwent resection. An unremarkable rehabilitation course followed, however,at the eleven week follow up the patient reported flinging motions of his left upper extremity which improved with extension and left lower extremity tremor which improved with ambulation. Referral was made to a movement disorder specialist and the patient was diagnosed with a high-amplitude, low-frequency Holmes tremor. Carbidopa-levodopa was initiated with plans to titrate, with possibility of deep brain stimulation if tremor was refractory to medication.

Discussions: Holmes tremor, also known as rubral tremor, has been classically described as a predominantly unilateral, low-frequency rest, kinetic and postural tremor, most commonly caused by vascular malformations localized in the brainstem. This tremor generally does not appear simultaneously with its lesion, rather, after a delay of one to twenty-four months. Treatment for Holmes tremors focuses on targeting of the dopaminergic system, frequently involving carbidopa-levodopa, with other options including benzodiazepines, anti-epileptics, thalamotomy and deep brain stimulation. However, these options have been shown to have limited efficacy.

Conclusions: Holmes tremor is a rare movement disorder, presenting in this case eleven months after midbrain hemorrhage in a patient with known cavernous angioma. This case illustrates the complexity of a delayed presentation of movement disorder following stroke and the difficulty that comes with a virtual patient encounter.